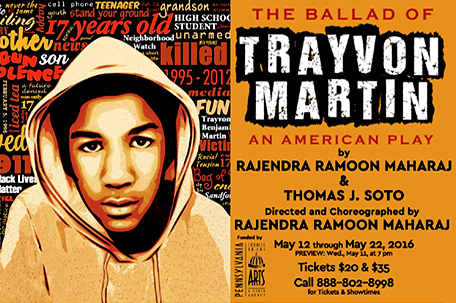 ‘The Ballad of Trayvon Martin’  is a poetic docudrama inspired by events surrounding the death of teenager Trayvon Martin. Music, hip-hop and modern dance meld to theatrically document the last seven hours of Martin’s life. The play recalls the events of February 26, 2012, when Martin was shot and killed, and how his legacy lives on today through the Black Lives Matter movement.

‘The Ballad of Trayvon Martin’  is the first of three plays that New Freedom Theatre will produce this summer. Executive Producing Director Sandra Haughton says, “‘The Ballad of Trayvon Martin’  is the culmination of a three-year strategic plan put in place by the New Freedom Theatre Board of Directors. Our goal is to bring both excellent art and artists to Freedom Theatre. I saw a reading of this play in New York, and knew immediately that we wanted both this play and Rajendra here at Freedom, and to share this play’s relevant subject matter with our community.”

Co-Author, Director and Choreographer Rajendra Ramoom Maharaj was recently appointed Guest Artistic Director for New Freedom Theatre’s 49th Season. Maharaj is a storyteller, artist and activist known for his documentary-style political work that deals with American history and events tied to the African American narrative. He started Rebel Theatre Company in New York City in 2003. Hailed by The New York Times as, “one of the most talented directors in New York.”

As a playwright, Maharaj has authored several plays, including Little Rock – a historical drama about the Little Rock Nine, Daisy, inspired by the life and legacy of the indomitable Daisy Lee Bates, Grey and Twenty-Five, Hansberry/Baldwin (Semi-Finalist for the Eugene O’Neil Playwright Festival.) Co. Written and Co. Conceived work: The Ballad of Trayvon Martin (Co-Authored by Thomas J. Soto), The Wanderer (Co-Authored by Adam Mace and Christian Lee Branch),History of the Word, a new spoken word play with music; Exposures, an urban spoken word choreopoem.

Maharaj says, “I believe that theatre is a powerful platform for social justice. The Trayvon Martin story is an important American story. Though it was written six months after the verdict, what better time to premiere this work as we look at the issues our country is grappling with today, the upcoming election and the future of the Black Lives Matter movement?”

Single ticket prices are $20 and $35, and available by calling Call the Box Office at 888.802.8998, or view details and order online at www.freedomtheatre.org at event link here. Box office hours begin April 19th, Thursday through Saturdays. Check web site for hours.