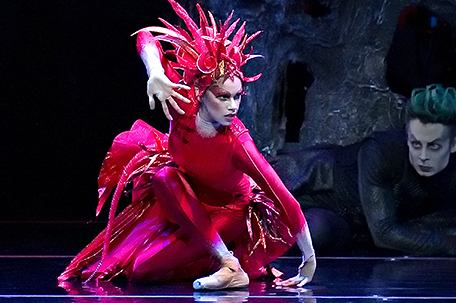 Author, filmmaker, television producer, and critic Nelson George may have worn a lot of hats in his long career, but his love for music has been  constant throughout. He’s published numerous non-fiction books on Black Music History as well as a series of novels using the music world as a backdrop, including “The Lost Treasures of R&B.” He recently made VH1’s rock doc “Finding the Funk,” Showtime’s “Brooklyn Boheme,” and “All Hail the Beat,” a short film for the Focus Forward campaign. For A Ballerina’s Tale, which premiered on Independent Lens on PBS in February, George turned to the world of ballet to get an up-close look at the groundbreaking dancer Misty Copeland. Clay Cane of BET called A Ballerina’s Tale “a nuanced, polished presentation of one of the hardest working women in her field — or any field.”

The graceful ballet star from San Pedro, California, became the first African American woman to become principal dancer at the prestigious American Ballet Theatre in New York, considered by many to be the most important ballet company in the country, and George was there for the ride. The busy filmmaker, who co-wrote the new TV series The Get Down for director Baz Luhrmann and is shooting a TV film about basketball, took a brief time-out to chat with us about A Ballerina’s Tale.

Why did you want to make A Ballerina’s Tale?

The larger interest to me is that ballet as an art form can not go forward without a wider base of appeal. What Misty has done is to make ballet part of the popular conversation, with a pop appeal we haven’t seen since Baryshnikov in the seventies, we want the film to help further that conversation.

How would you describe for people the type of film you made?

The film is very much a memoir of Misty at a turning point in her career. It’s not a biography that goes deeply into her family background. It’s about her life as a dancer in New York and a mini-history of how body image and race affect the world of classical ballet.

What were some of the biggest challenges you faced in making it?

Access is always a challenge on any documentary. For us the issue was could we get enough quality dance footage of Misty. The union rules and fees in New York for shooting at a place like the Metropolitan Opera are difficult to overcome. So we raised money for a specific multi-camera shoot at BRIC Arts in Brooklyn that yielded us great footage of Misty in action. We also shot performances and backstage footage in such exotic places as Italy, Australia, and Brooklyn!

How did you gain Misty’s trust enough to make A Ballerina’s Tale?

I met Misty and her manager Gilda Squire at a cocktail party and was in contact with both socially for six months before I actually proposed doing the doc. So I wasn’t a stranger suddenly showing up at her doctor’s office with a camera wanting to see her x-rays. Moreover, when I first started shooting it was literally just me with a small Canon camera. Much of the initial footage shot in the project’s first four months was just me following Misty. As time went on, and we were able to raise money, the crew slowly increased.

What would you have liked to include in your film that didn’t make the cut?

There were some scenes I shot in Lincoln Center that I wish we could have included. I was able to watch her prepare backstage for a crucial performance in her comeback from injury and then her immediate reaction coming off stage, but we couldn’t afford to pay the various fees necessary to get permission. Ultimately that helped us since we included several, actually better, sequences in its place. But I would have loved to have been able to use some of it.

Do you have your own favorite moment in A Ballerina’s Tale?

The scene with Raven Wilkinson, the veteran black ballerina who’s been a mentor to Misty, is one of my favorites and one that audiences respond to. Raven was a black ballerina at a white touring company in the 1950s. Misty discovered her via the documentary Ballet Russe. It turned out they lived just a few blocks from each other. Their interaction in the film is very warm and spontaneous.

What has the audience response been so far?

We’ve screened the film all over the U.S. and in Canada and have had great, very emotional crowds. At a screening in Toronto I met a trio of ballerinas who danced in the 1970s who told me how much of the life of the ballerina we captured in the film. They saw so many parallels to their lives in Misty’s struggle back from injury. The film also plays very well with families. Fathers and mothers, as well as entire ballet classes, have come out to see the film. We’ve had a lot of crying at screenings from people moved by Misty’s story who see themselves in the film.

What didn’t you get done when you were making A Ballerina’s Tale?

I promised Misty that by the end of the film I’d be able to catch her and raise her up like the male dancers at ABT. Well I quickly figured out that the male dancers are powerful and skilled guys. So that didn’t happen. [laughs]

What are your three favorite films?

Do you have any advice for aspiring filmmakers?

Young filmmakers today are very fortunate. Cameras are plentiful. Editing equipment easy to use. You can upload your project to the public at any time. So there’s no excuse for not making what you want to see. Just do it!

The Independent Lens documentary “A Ballerina’s Tale can be bought on DVD here.