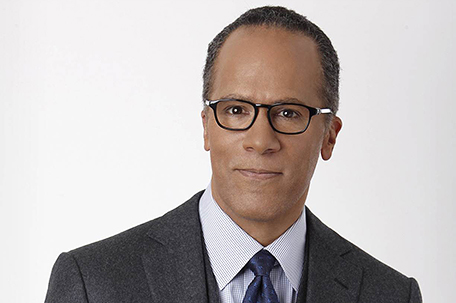 WASHINGTON–Lester Holt, anchor of ‘NBC Nightly News with Lester Holt,’ has been selected as the 2016 Journalist of the Year by the National Association of Black Journalists (NABJ).

The annual award recognizes a black journalist who has distinguished himself or herself with a body of work that has extraordinary depth, scope and significance to people in the African Diaspora.

“Lester Holt is a dynamic broadcaster who is diligent in his pursuit of the facts and demonstrates a stellar work ethic that shows up in his reporting, which also provides context and superior coverage for television and digital audiences,” NABJ President Sarah Glover said. “His quiet confidence and low-key demeanor have garnered trust and admiration from both the viewers who watch him every night and from journalists across the country.”

Holt was named the permanent anchor of NBC Nightly News in June 2015. The promotion made him the first black solo anchor at a flagship newscast of a major American television network. Since assuming the role, he has helped NBC Nightly News maintain its ranking as the most-watched evening news program. He also continues as the anchor of “Dateline NBC,” the network’s signature newsmagazine and longest-running show in primetime.

As anchor, Holt has traveled across the world anchoring and reporting. He anchored from Paris following the Charlie Hebdo massacre on January 7, 2015, that killed 12 and was on site after a series of terrorist attacks on November 13, 2015, that killed 135. Following the attacks in France, he conducted an exclusive interview with one of the commanders of the SWAT team that took down the terrorists inside Paris’ Bataclan Theater.

Last spring, Holt traveled to Baltimore, Maryland, to give viewers a close look at the protests sparked by the death of Freddie Gray on April 12, 2015. He was in New Orleans as the country commemorated the 10th anniversary of Hurricane Katrina. He reported for “The Today Show” and anchored nightly from Havana as President Barack Obama made his historic trip to Cuba. He has also led NBC’s political coverage by interviewing candidates, leading Super Tuesday primary coverage and moderating the NBC News and YouTube Democratic debate.

“I had the honor of working with Lester for 14 years at WBBM in Chicago, where he was the main anchor,” said Dorothy Tucker, NABJ Vice President of Broadcast.  “His commitment to excellence, his passion for news, his dedication to the community contributed to his success in Chicago. Plus, he’s genuinely a nice guy.”

A journalist for the last 35 years, Holt joined NBC in 2000 as an anchor for MSNBC. He later began anchoring the weekend editions of “The Today Show” and NBC Nightly News before his current roles. Holt also reported and anchored at the CBS owned-and-operated stations in New York, Los Angeles and Chicago, which earned him several Emmy Awards and a Robert Kennedy Journalism Award.

The Hollywood Reporter recently named Holt one of the 35 Most Powerful People in Media. In October 2015, the native Californian was inducted into the California Hall of Fame. He and his wife Carol, have two sons and reside in New York. One son, Stefan, has followed in his footsteps and is an anchor at NBC New York.

Holt will be recognized at the association’s Annual Convention and Career Fair, Aug. 3-7, in Washington, D.C. The NABJ Special Honors recognize the best journalism that addressed issues affecting the black community in 2015.