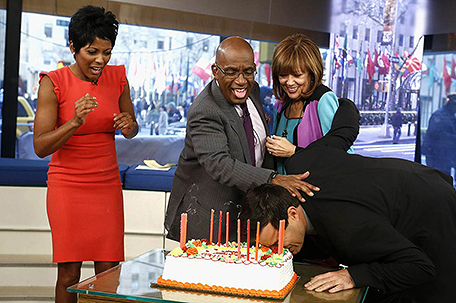 NBC is certainly rolling out the red carpet for Megyn Kelly, who the network poached from her former home at Fox News, where she had worked for 12 years.

Earlier this month, Kelly announced she was leaving Fox News to take on a new role at NBC News. As part of a multi-year agreement she inked with NBC, Kelly will host her own daytime news program, as well as anchor a Sunday evening news show, and also take part in special political programming and other breaking news coverage.

This obviously meant that there would be a lineup shakeup to accommodate Kelly at NBC – notably the daytime hour.

The network hasn’t made any official statements on this yet, but various reputable sources, including the Los Angeles Times, USA Today, Deadline, the New York Times, and several others of their stature, are all reporting that programming Kelly’s new daytime show into NBC’s morning schedule will result in Al Roker and Tamron Hall’s “Today’s Take” hour – which currently airs from 9AM to 10AM – being canceled, starting in the fall of this year. Sources say Kelly’s show timeslot is still being decided by NBC, but it’s expected that she will take over either the “Today” show 9AM or 10am hour; if it ends up being the 10AM hour, Kathie Lee Gifford and Hoda Kotb, who currently host the 10AM hour, will move to 9AM.

Kelly’s new show will not fall under the ‘Today’ show banner, but will instead be Kelly-branded daytime program.

But no matter which hour Kelly’s show gets slotted in, Roker and Hall will no longer be hosting any hour of “Today.” Roker will likely continue his weatherman duties during the first two hours. Hall also hosts a show on MSNBC which airs weekdays.

NBC coughed up some big dollars to draw Kelly from Fox News, where she was making a reported $10 million to $12 million a year. Now at NBC, she’ll be earning between $15 million and $20 million annually, according to The New York Times and The Wall Street Journal. So they obviously want to get their money’s worth. By comparison, Matt Lauer is paid over $25 million a year. Both Roker and Hall (when she was employed there) were said to be earning less – in the single-digit millions.

Once again, NBC has yet to comment on the above reports.