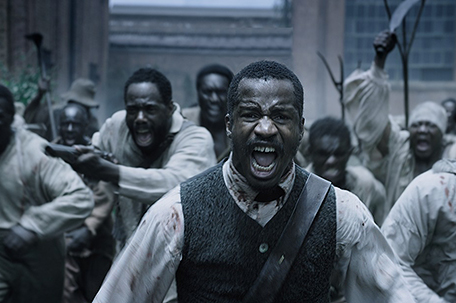 ABOVE PHOTO:  The Birth of a Nation

PARK CITY, Utah — Nate Parker left a successful Hollywood acting career behind to make the movie that mattered most to him.

It took seven years for Parker to bring the story of slave rebellion leader Nat Turner to the screen. The Birth of a Nation premiered Monday at the Sundance Film Festival.

“I’ve poured everything that I am into making it,” the writer/director/actor/producer said following an uproarious standing ovation. “I made this film for one reason, with hope of creating change agents, that people could watch this film and be affected.”

Turner was a slave who taught himself to read and became a preacher, bringing profits to his owner as he delivered God’s word to slaves throughout the state. But those travels showed him such injustice and cruelty that he had to act, and he led a violent rebellion that wiped out 60 slave owners.

The Birth of a Nation is a beautiful, painful and powerful film that juxtaposes pastoral settings with inhumane violence. Elliot Davis’ cinematography captures the ethereal natural settings of the American south and the heartbreaking brutality of slavery.

It introduces Nat Turner as a precocious boy who was deemed a leader by his African elders but who grew up a prisoner of slave owners in Virginia. A kindly white woman recognized his intelligence and introduced him to the Bible, and Turner was a believer. He preached and believed, ultimately deciding that God’s word justified bondage as much as it did freedom, and he preferred the latter.

Parker embodies Turner’s compassion and heart, on both sides of the camera. As Turner, his eyes communicate a deep understanding of human nature. As the writer, director and producer of the film, he channels that understanding into a moving work of art.

He said he wanted to create “a healing mechanism for America.”

“We have to look at slavery and the layered system that it was, because then it will be a lot easier to accept the fact that the remnants or legacy of it could be affecting us now,” he said. “Without honest confrontation, there is no healing. Slavery was an injury that was inflicted upon people of color in our country, and the more we ignore it, the more those wounds will seep and our children will be dealing with it, and their children will be dealing with it.”

The film was difficult to make, Parker said, and not just because of the painful roles for both black and white actors.

“Anytime we’re dealing with our history, specifically with slavery, I’ve found it’s been desperately sanitized, so there’s a resistance to dealing with this material,” Parker said. “The original D.W. Griffiths, the original ‘Birth of A Nation,’ was the foundation of our industry. We’re built on sand in this industry. We just are. And if we don’t give it attention, we’re going to have these issues, this racist infrastructure that we’re going to have to deal with from generation to generation.”