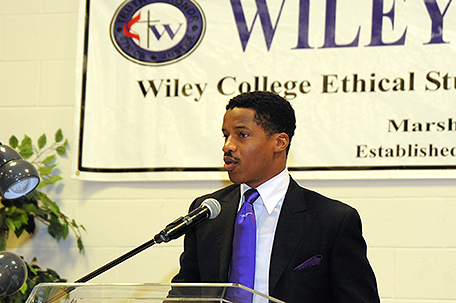 ABOVE PHOTO:  Nate Parker, speaking at Wiley College, the home of The Great Debaters.

The historically black Wiley College was the setting for a film in which he co-stared – “The Great Debaters.” And now Nate Parker has decided to launch a film school at the East Texas university, which will carry his name: The Nate Parker School of Film and Drama.

The announcement was made by the school, and Parker confirmed it on Twitter.

“The hope is that we cover all aspects of filmmaking, from sound, lighting, and cinematography, to just studying film specifically with the cultural component and the history of film,” the actor/writer/director of “The Birth of a Nation” said.

Following “The Great Debaters” Parker apparently stayed in touch with Wiley College, even using their a-capella choir for the soundtrack to “The Birth of a Nation.” His goal for the new film school is that it empowers young people in East Texas to tell their own stories.

“You control the moving picture, you control the masses,” Parker said. “So really getting them rallied around the idea of re-claiming the narrative of America specifically through the eyes of people of color.”

The school will officially welcome its first class in the fall. Leading up to that, there will be a 9-day summer institute program which will act as a pilot for the school. About 30 high school and college students will be selected, including 10 current seniors at Wiley College.

“If I can create a pipeline toward filmmaking physically through developing the college, having filmmakers be nurtured and cultivated here, and then having somewhere for them to go with respect for them actually being able to engage in filmmaking here in East Texas, then it kind of serves multiple purposes,” Parker added.

Applications for that summer institute will be available in the coming week, and once it happens, I’ll share here.