Naomie Harris — A charming chat with the Oscar-nominee 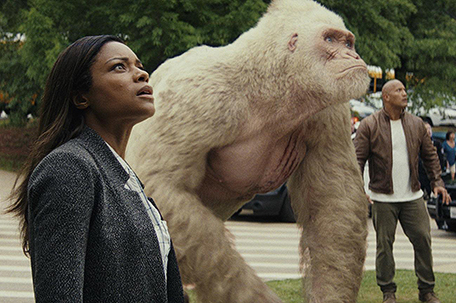 Naomie Harris was recently seen in the Academy Award-winning movie“Moonlight.”. Harris was also nominated for an Oscar, Golden Globe, Screen Actors Guild and BAFTA Award for her tour de force performance as the protagonist’s mother, Paula.

She is set to appear next in director Andy Serkis’ feature adventure, “Mowgli,” as a member of a stellar cast that includes Benedict Cumberbatch, Christian Bale and Cate Blanchett. The film is scheduled for release in the fall. 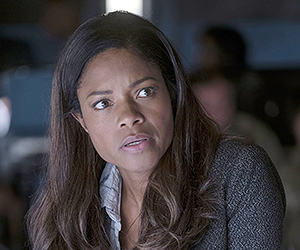 Harris reprised her role as Moneypenny in the latest installment of the James Bond franchise — “Spectre” — opposite Daniel Craig. She was first seen as the iconic character in “Skyfall,”, which was directed by Sam Mendes.  “Skyfall” won the 2013 BAFTA Film Award for Outstanding British Film and went on to be Sony Pictures’ highest-grossing film ever, with a worldwide box office of over $918 million.

In 2013, she played Winnie Mandela in “Mandela: Long Walk to Freedom” opposite Idris Elba. Her other screen credits include: “Collateral Beauty” opposite Will Smith; “Our Kind of Traitor”opposite Ewan McGregor; Antoine Fuqua’s “Southpaw”, opposite Jake Gyllenhaal; “The First Grader”; “Sex & Drugs & Rock & Roll”; “Pirates of the Caribbean: At World’s End”; “Pirates of the Caribbean: Dead Man’s Chest”; “Miami Vice”; “After the Sunset”and “28 Days Later.”

Here, she talks about co-starring with Dwayne Johnson in “Rampage,” an action-oriented monster flick set in Chicago.

Kam Williams: Hi Naomie. I’m honored to have another opportunity to speak with you.

Naomie Harris: Oh, it’s an honor to speak with you, too, Kam.

KW: This is my first interview with you since your Oscar nomination for “Moonlight.” Congratulations!

NH: Thank you so much. That’s really sweet!

KW: You really did a phenomenal job of disappearing into that role. And because of the picture’s modest budget, you had to cram all your scenes into three days of shooting.

NH: Yes, we only had three days, which actually turned out to be wonderful because instead of waiting around in a trailer, I got to spend all my time working.

KW: All the buzz after the premiere the other night was about your gold dress.

KW: Yes! It was stunning! Who’s the designer?

KW: Who designed your accoutrements?

KW: Well, it all blended beautifully.

NH: In “Moonlight,” I had such a dark, harrowing role. Coming off of that film, I wanted to do something relatively lighthearted that would offer me the opportunity to have fun. I also wanted to work with Beau [Flynn] again. He produced my first Hollywood movie [After the Sunset]. I’ve always loved Beau and admired his work. And Brad [Peyton] is a very passionate director who got me so excited by his enthusiasm that i couldn’t wait to start working on the project. It was almost contagious. I knew that working with him was going to be a lot of fun. That turned out to be true, since every day was quite an adventure on the set. He’s an amazing human being and a fantastic director. And then there was The Rock! I wanted to work with Dwayne [Johnson]. He’s a rarity in how he exudes such charisma and appeals to the entire family: men, women and children alike. So, I was very eager to work with him as well.

KW: He and Brad have a successful track record together, having collaborated on “San Andreas” and “Journey 2.”

NH: Yes, I observed a wonderful bond and a great shorthand between them which was very helpful and great to see on set.

KW: I loved those light moments, like when Dwayne’s character moans, “Of course, the wolf flies.”

KW: I enjoyed this monster movie more than “The Shape of Water.” “Rampage” went in the direction I was hoping “Shape” was headed.

NH: That’s funny. That would’ve made it a completely different kind of film.

KW: Did you play the Rampage video game growing up?

NH: No, I didn’t play it as a child. I wasn’t really a gamer. But I love the nods to the game sprinkled throughout the movie. A lot of the computer game’s fans are going to appreciate that.

KW: What was it like acting opposite Jason Liles, the motion capture performer who played George, the giant albino gorilla?

NH: It was great, because I thought we’d just have a tennis ball or a gorilla head, if we were lucky, to act off of, because that’s what you normally get in this kind of movie. But Brad felt that we needed something more substantial to react to, so he brought on Jason who gave a fantastic performance. He was so emotive and really gave us a lot to react to.

KW: Despite being classically trained at the Old Vic [in Bristol], you’re no stranger to the action genre. I first interviewed you for “Ninja Assassin” and later for the Bond flick, “Skyfall.”

NH: [Giggles] “Ninja Assassin!” That’s really going back a ways. The stunt work for that film was much more demanding and involved a lot more training. And I also ended up with a lot more bruises. “Rampage” was much kinder on my body, since most of the acting was against a green screen.

KW: I recently read the announcement that they’re doing Bond 25. You must be excited about that.

NH: Yes, I’m really, really excited! Kam, you know that most of the time spent as an actor you’re sort of a gypsy, traveling around the world. You don’t really belong anywhere, in a sense. You uproot your life and, in this case, go off to Atlanta, where we shot “Rampage.” After three or four months there, you come back home for a while before heading somewhere else. There’s very little continuity. What I like about Bond is how it offers me a kind of family that I get to return to. I really love that feeling and everybody involved.

KW: Do the 007 movies involve much travel?

NH: Not for me. The guys flew all over the world for “Spectre,” but I shot all of my scenes in London.

NH: [LOL] There’s a huge difference because the person on the red carpet has had a whole village of people help her get ready, and done her hair and makeup, and put wonderful clothes on her. The person I am at home is much, much simpler. I’m a jeans, t-shirt and trainers girl. Yeah, that’s how I roll most days. I’m very, very casual.

KW: Who is your favorite clothes designer?

NH: You’re really into fashion, Kam, aren’t you? I don’t have one particular favorite. I love mixing up designers like Calvin Klein, Peter Pilotto and Mary Katrantzou.

NH: I love musicals. My favorite film of all time is “The Sound of Music.” I’d love to take part in a remake of “West Side Story” or what have you. But I can’t sing, and I can’t dance, so I don’t think there’s much hope for me, really.

NH: What’s in my wallet? Omigosh! My driver’s license, obviously. My credit cards and a bit of cash. I even have an old library card in there as well.

KW: Thanks again for the time, Naomie, and best of luck with the film.

To see a trailer for Rampage, visit: https://www.youtube.com/watch?v=coOKvrsmQiI

Naomie Harris–“Skyfall”-ing for a Bond Girl