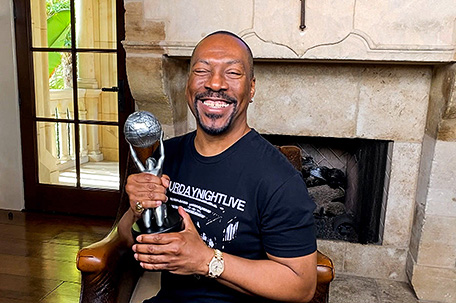 ABOVE PHOTO: Eddie Murphy from the 52nd NAACP Image Awards. (Photo: Courtesy of the NAACP)

President Joe Biden and Vice President Kamala Harris kicked-off the night in a special recorded message highlighting the importance of the NAACP and saluting its work.

The late Chadwick Boseman won the award for Outstanding Actor in a Motion Picture – “Ma Rainey’s Black Bottom.”Chadwick’s wife, Taylor Simone Ledward, accepted the award in his honor, encouraging fans to be proactive about their health and visit StandUpToCancer.org for more information about detecting the signs of colon cancer.

NAACP President and CEO, Derrick Johnson, presented NBA superstar, business entrepreneur, and philanthropist, LeBron James, with the President’s Award which was presented in recognition of a special achievement and distinguished public service.

In his acceptance speech, he recalled a time in High School in 1944, where he went door-to-door soliciting memberships for his local NAACP chapter in Ohio.

Fans can relive all of the Image Awards moments from the week in the Virtual Experience’s NAACP Theatre at: virtualexperience.naacpimageawards.net.