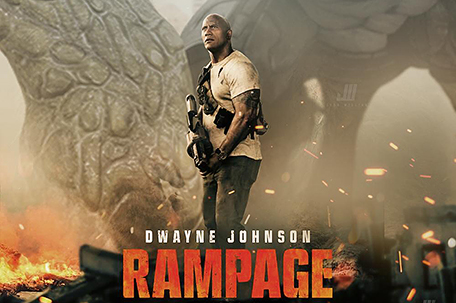 Hey, sci-fi fans, did you find it hard to stomach the sight of a human mating with another species in “The Shape of Water,” too? If so, have I got a movie that’ll wash the bad taste right out of your mouth!

Call me shallow, but I much prefer this old-fashioned monster flick. Loosely based on the video game of the same name, “Rampage” is reminiscent of campy Japanese classics like “Godzilla” (1954), “King Kong vs. Godzilla” (1962) and “Mothra vs. Godzilla” (1964).

But instead of decimating Tokyo, the gargantuan creatures here have their sights set on the Windy City. Another significant difference is that “Rampage” is a big-budget spectacular that relies heavily on CGI and state-of-the-art special f/x.

Otherwise, you know the drill. Some ordinary animals morph into mammoth, man-eating beasts in the wake of a scientific experiment gone terribly wrong. In this case, we have a wolf, a crocodile and an albino gorilla mutating into alpha predators.

The anthropomorphic primate actually has a name, George (Jason Liles). That’s because Davis Okoye, an ape-whisperer stationed in Rwanda, raised him in captivity. Okoye leads an anti-poaching unit dedicated to the preservation of endangered species.

However, he makes a beeline to Chicago as soon as he receives word that the enormous animals have begun wreaking havoc. There, he joins forces with Dr. Kate Caldwell (Naomie Harris), a disgraced geneticist in need of redemption with access to an antidote. But before the cure can be administered, brace yourself for generous helpings of horror fare, ranging from the scaling of skyscrapers, to mass hysteria in mob scenes, to my favorite, helicopters swallowed whole.

“Rampage” marks the third time that Johnson has collaborated with director Brad Peyton. They worked together on the equally-bombastic “Journey 2” (2012) and “San Andreas” (2015). The capable supporting cast includes Jeffrey Dean Morgan, Malin Akerman and Joe Manganiello.

For all the visually-captivating action sequences, what I enjoyed most about “Rampage” was the comic relief coming courtesy of the hero, and invariably in the middle of major mayhem, as if to remind everybody that we’re just watching a movie. After a sightseeing boat filled with tourists flips over, Davis says, “Well, that sucks.” Then, when an iconic building is flattened, it’s, “I need a drink.” And as a menacing creature unexpectedly takes flight, he matter-of-factly moans, “Of course, the wolf flies.”

Not only breathtaking stunts but perfect comedic timing from a beefy action star at the top of his game!

To see the trailer for “Rampage,” visit: https://www.youtube.com/watch?v=coOKvrsmQiI