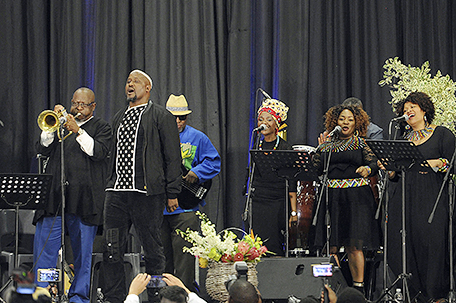 JOHANNESBURG — Musicians in South Africa performed in a tribute for Hugh Masekela, the jazz musician and anti-apartheid activist who died after a decade-long fight with cancer.

The joyful memorial which drew about 400 people was held Sunday at the Soweto campus of the University of Johannesburg. Among those who performed were South African musicians Jonas Gwangwa, Sipho “Hotstix” Mabuse and Zimbabwean Oliver Mtukudzi.

“We knew he was famous, we knew he was great but we never ever thought he was (as) great as the world has shown us since his death … how much it loved him,” his sister Barbara told the crowd.

“Let us rejoice in the realization that Bra Hugh contributed meaningfully to humanity during his lifetime,” said Nathi Mthethwa, South Africa’s Minister of Arts and Culture. “Although he can no longer compose new songs, grace our stages and blow the trumpet, we know that his thundering voice will resound beyond the grave. Even death cannot silent his voice. Bra Hugh lives through his music.”

Masekela died on Tuesday at the age of 78. The trumpeter, singer and composer started playing the horn at 14. He became an integral part of the 1950s jazz scene in Johannesburg and went to Britain and the United States in the 1960s, using his music to spread awareness about South Africa’s oppressive system of white minority rule.