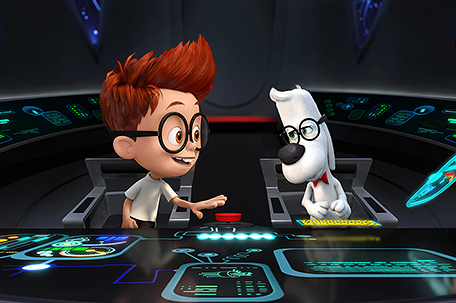 When I think back to my childhood, one of the highlights was the wealth of awesome cartoons.  I spent countless summers memorizing the words and songs to every Disney film. I owned almost every Disney film on VHS (some I later bought on DVD). Some of my favorites were The Sword in the Stone, The Little Mermaid, Beauty and the Beast, and The Lion King (of course)!  Needless to say, I was over the moon when I was asked to interview the co-director of The Lion King, Rob Minkoff.  Rob Minkoff, director and animator extraordinaire gives us yet another classic, with the 3D computer animated film adaptation of Mr. Peabody and Sherman.

Many of you may remember the original Mr. Peabody and Sherman segment called Peabody’s Improbable History…which was introduced during the popular The Rocky and Bullwinkle cartoon show in 1959. Mr. Peabody, the most intelligent dog in the world, teaches us all about time travel while taking his adopted human son Sherman on a series of adventures. Mr. Peabody used his Wabac machine to show us all that history can be fun.  Director Rob Minkoff shared the following, “I think I may have become a history buff entirely due to Mr. Peabody and Sherman. When I was kid, I remember seeing them go on these historical adventures…and I don’t think I knew anything about who they were meeting. All I knew was that if Mr. Peabody thought it was important, it would be a good idea for me to remember who these people were…because they did something significant.” He went on to say, “Getting to know them in that way was fun, funny, and entertaining and it wasn’t what you expected. It wasn’t a dry history lesson, and it made the subject of history more fun.”

Another tidbit of history regarding this film is that it took twelve years to make! I asked Rob why it was so important for him to tell this story, and he proclaimed with a laugh, “I think it’s ‘cause I’m crazy! I don’t like to give up on anything. Perseverance for me is key.” He went on to share, “It was an idea that seemed relevant and contemporary, even though it was from fifty years ago. It was an idea of a dog adopting a boy. It was fun, and odd in a great way. The Wabac machine and time travel and all these things seemed like they were worth bringing back.”

Mr. Peabody and Sherman is an enjoyable film with outstanding visual effects, lovable characters, and a fun filled history lesson.  Mr. Peabody and Sherman are not your typical father and son, but this alternative family experiences many of the same challenges that every child and parent experience.  The film also gives us many valuable life lessons.  It gives us lessons in acceptance, and reminds us that even if someone or something you love is different, you should be true to your heart. The most valuable lesson this film gives us is that nobody has the power to make you feel ashamed unless you give them that power. I wholeheartedly recommend this film especially for anyone with a young family. Mr. Peabody and Sherman in theaters nationwide on Friday March 7th.

Dispute of will prevents burial of Sherman Hemsley