Movie Review: The Story Of “Us” 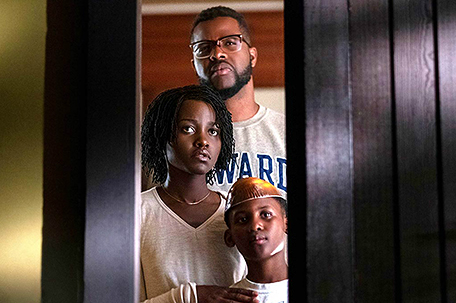 ABOVE PHOTO: Winston Duke, Lupita Nyong’o and Evan Alex in a scene from “Us”.

Maybe it’s just me, but Jordan Peele’s latest film kinda tells me that it might be time for the Oscar-winning  filmmaker to seek a therapist.

Because I try to stay away from scary movies whenever possible, I was prepared to sit out Jordan Peele’s latest film “Us” until I found myself in a room filled with people watching it and nowhere to go, which was the same way I wound up watching his last film, the Oscar-winning “Get Out.”

But after checking out the film, which stars Oscar-winning actress Lupita Nyong’o and “Black Panther”’s Winston Duke, I came to a few conclusions:

One, as fright films go, “Us” is decent, if not a bit disconnected and hard to follow in spots. Any fright film that doesn’t kill off all the Black folks by the end of the opening credits is a sign of progress.

Two, if Nyong’o’s name isn’t mentioned in the “Best Actress” conversation when Oscar time rolls around, it’s time to completely overhaul the Academy. The performance she gives in this film merits it.

And three, it might be time for Peele to consider talking with someone. “Us” shows that he’s got some issues he might need to work out, and if his movies represent how he’s processing those issues, I’m afraid to see what comes after “Us”.

“Us” begins with the Wilson family headed on a family vacation to wife Adelaide’s (Nyong’o) childhood home in Santa Cruz, California. Now this isn’t the most tranquil spot for Adelaide because of something that happened to her when she found herself lost in a Fun House by the beach as a child, but once husband Gabe (Duke) and children Zora (Shahadi Wright Joseph) and Jason (Evan Alex), head out to the beach, they meet up with their friends, the Tylers (Elizabeth Moss and Tim Heidecker.)

When Jason gets lost at the beach, the trip ends early, but the terror doesn’t. When sinister doppelgängers armed with some really sharp scissors, (and in the case of Adelaide’s doppelgänger Red, a set of handcuffs) arrive at the house to begin the “Untethering” things get bloody, frightening, and a little bit Pogo-esque, meaning that in this case especially, the world has met its enemy, and it is “Us”.

Let me put it this way. If you remember the song “I Got Five On It”, it’s going to sound a whole lot different to you once you finish watching this film. Heck, when I hear it in the commercials for “Us”, I double-check my doors to make sure they’re locked.

As I mentioned earlier, I’ll be really surprised if Nyong’o doesn’t garner her second Academy Award for her work as Adelaide/Red. She commands the screen when she’s on, and if there’s one thing you can figure out right away once the scissors start stabbing, the story at its core is about those two sides of a pretty angry coin.

I even got the allegories to the existence of Black people in America. The fact that there are two Americas and despite a lot of progress, they’re still separate, but unequal.

But I’ve got to tell you, I wonder what Peele was thinking about when he wrote this. Negotiating those two Americas sometimes requires us to find a creative way to express ourselves and try and work it out. I’m guessing that this is his metaphoric way to get people to understand what happens when you turn the anger inward.

But even with all I did understand, there was a lot to unpack, including an ending that I won’t share, but that’s been discussed in other places. I won’t spoil it for you.

That said, I can recommend “Us” if for no other reason, but that this is the rare horror film in which Black folks don’t get killed first.