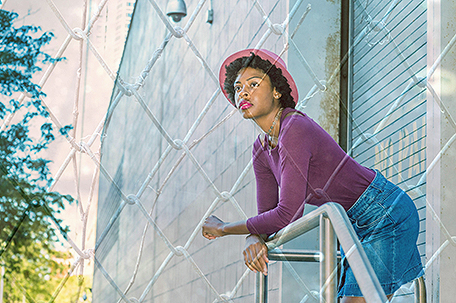 Everyone who knows me, know I love Denzel Washington. I think he is one of the coolest, sexiest men on the planet. I have watched him over the years in many films.   In addition to being sharp and good looking, he is really a great actor. He has starred in many films and has played many different roles and characters, and I loved each one, except “Fences.” “Fences”  is his latest film, which is currently in the theaters and has received special recognition from the movie industry.

I remember briefly talking to my friend Kareisha about “Fences” the weekend the film was released. Her response was “its a man’s flick, it was just OK.”  That was not the response I was looking for from my friend, another Denzel fan. However I didn’t challenge her, I let it go and decided to check it for myself. I went to see the movie with two other girlfriends, a week or so later. Denzel’s acting was outstanding; he is so talented that he was the director/producer and also starred in the film. The acting was superb, my Denzel fans/friends raved about him and of course his acting.

However, oddly enough I didn’t like Denzel’s character in the movie. The first time I saw the film, I actually left the theatre angry at him, and wasn’t really sure at first why I had such a strong reaction to the movie. So when an opportunity came up again to go back to see “Fences,” I decided to go back to try and figure it out.

“Fences” takes place over 50 years ago in a community stricken with real poverty. It was a very different time for the Black family, especially for the Black man also commonly known as ‘Negro’ back then — or worse. Denzel’s character was a very angry man who felt he was misunderstood and knew he was unfairly mistreated because of the color of his skin by all the systems that impacted his life. Today we recognize that as racism and structural inequality. While many things today have changed, so much remains the same. It’s very hard to even admit, (if you haven’t experienced) today how some of the same systems that existed then to discriminate, exist today in the form of institutional racism, and are sometimes difficult to detect.

So back to “Fences,” Denzel blamed the world for the situations he found himself in, and felt a certain entitlement that he deserved somehow, to satisfy or pacify himself by having an affair. Denzel’s wife, was beautifully portrayed by actress Viola Davis. She was the typical wife of that era, referred to today as a “ride or die chick,” meaning she will go to all and any lengths to please and support her man.

I soon figured out that was where my anger lived. The affair and the indignation of him seeing his actions as something he expected his wife to accept hit home and caused me to feel many strong emotions in my spirit.  We know that this was very common behavior back then as it is today. I believe my personal experience of being a child out of wedlock, feeling as a child the repercussions and the unwelcomed consequences of the parental cheating and deception that played out in my life felt way too familiar.  However, I guess that is the sign of a good production when actors can help you feel and connect in a strong way to the story and characters. I felt a familiar sorrow for the wife who lived with his pain, and her own pain because she felt it was the right thing to do for her husband. It wasn’t until I sat through the film a second time that I was able to make the connections and understand those emotions that came up and the very personal feelings and emotions that are are still for me very present in some ways.

Without giving away anymore of the movie, because I hope you will go and check it out for yourself. Please see if you can connect with Denzel’s character while understanding his fears, pain and grief, maybe even have empathy for him as a Black man living during that time period, and not become angry with him, as I am trying to do.

Denzel Washington and Viola Davis have been named nominees for special awards, they are so deserving, they both have my vote. Check out “Fences” — you won’t be disappointed.