Movie Review: Need some ‘Loving’ from Dr. Feelgood for this one 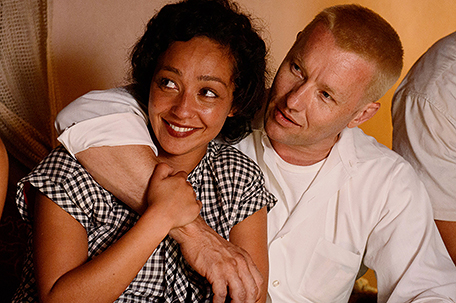 ABOVE PHOTO:  Ruth Negga and Joel Edgerton as Mildred and Richard Loving in ‘Loving’.

Seeing an interracial couple walking down the street in 2016 is not such a big deal.  You might see them with a couple of mixed curly-headed babies in tow, which is also not a surprise.  After all, it is 2016, and if we can buy the ‘post-racial America’ guise, we can allow people to marry who they wish, no matter their color, creed, religious outfit or even gender.  Our children and grandchildren have been afforded this liberty due to the many who fought and, in some cases, bled and died for these rights.  For the youngest generation coming up now, their America will be filled with all kinds of practices that were labeled taboo not so very long ago.  Writer/Director Jeff Nichols understands people’s fear of the unknown in new film Loving, paying homage to Richard and Mildred Loving, and their battle to choose to look beyond race and into each other’s hearts.

Based on a real life tale of love and war, Richard and Mildred Loving were an interracial couple in Central Point, Virginia during the late 1950’s and early 60’s.  Richard Loving (Joel Edgerton), a White male, and Mildred Jeter (Ruth Negga) met and fell in love and married shortly after Mildred got pregnant at 18.  The couple went to D.C. and got married and returned home to Virginia shortly after.  Although Richard is six years her senior, nothing could keep them apart, not even being thrown into jail as Virginia had strict anti-miscegenation laws during the time.  The couple finds themselves facing turbulent times as many don’t approve of their union and had no qualms about giving them grief.  For years, they fought their way through the courts until a letter to Senator Bobby Kennedy’s office changes things, allowing them the chance to seek justice through the American Civil Liberties Union (ACLU) ultimately taking their case to the Supreme Court.

The film absolutely captured the appeal, ease, and energy of a small Southern town.  The color themes were neutral and subdued, with a hint of a yellowish tinge on the camera to reflect the nature of the period piece.  There were sprinkles of light humor and racial tension from both sides of the fence, although one of the most powerful race monologues was given by Virgil (Will Dalton) in a juke joint where he explains to Richard that he can now empathize with the plight of Blacks in America because of his experience with miscegenation.  The scene was well-written and executed expertly.

However, this movie is so straightfoward and somber, that it teeters on monotony.  Based on the story alone without being able to speak directly to the couple both have since passed rendered the storyline simplistic and at times frail.  This movie wanted the audience to understand that this couple loved each other, and that’s exactly what they got.  The chemistry between the main characters was evident, but their interaction with their children seemed forced and inauthentic.  The clothing was basic and subdued, reflecting the social economic stance of the South at the time.

This film was missing some key elements.  How were the children educated? There was never a scene of them going to school, but they were always playing outside or in the house which makes the audience wonder if they were recluses.  When they interacted with other children, were they ever teased?  Did they understand what was going on with their parents and that they were defying the odds?  We don’t really know much about Richard and Mildred aside from the fact that one is reserved and the other a bit more outspoken if you want to call it that.  There is much to be left to the imagination which is unfortunate because it would have made the storyline that much stronger and filled those gaps in the plot.

While I believe this story is so important for our mixed children and their culture, it should have been executed in an understandable fashion.  Loving lacked a lot of the basic character information.  Towards the end of the movie it started to shift and pick up some of the missing pieces, but by then it was much too late to change direction.