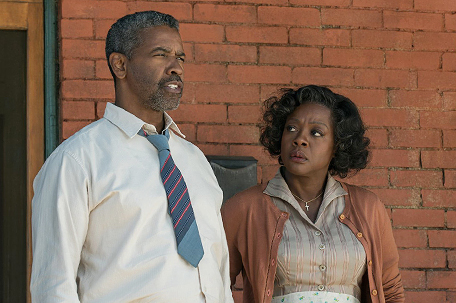 ABOVE PHOTO:  Denzel Washington and Viola Davis in a scene from Fences.

Troy Maxson (Denzel Washington) is an everyday man.  The kind of man who wakes up much too early for a job he doesn’t really like in exchange for a little bit of money to give to his wife Rose (Viola Davis) and spend the leftovers on a pint of gin reserved strictly for shooting the breeze on Fridays with longtime friend Jim Bono (Stephen Henderson).  He’s a pretty simple man with a life that isn’t quite as simple but very much relatable in Denzel Washington’s most recent directorial presentation ‘Fences’, an adaptation of the play by renowned Pittsburgh playwright August Wilson.

For this film, Washington decided to stick as closely to the script as possible, filming on location in the Hill District of Pittsburgh.  This was a smart choice as you can feel the sense of the city and the familiarity it holds.  Pittsburgh serves as a character in its own right, as the entire film seems so homey and natural.  Watching Fences is like watching your relatives share conversation about the stresses, evils, and triumphs happening in their lives.

Fences tells the story of the Maxson family, in particular Troy Maxson navigating work and home life and trying to maintain a balance that he ultimately never attains.  His supporting cast includes best friend Bono, wife Rose, sons Lyons (Russell Hornsby) and Corey (Jovan Adepo), and his disabled war veteran brother Gabriel (Mykelti Williamson).  Troy’s life didn’t end up how he wanted, as he had big hopes of playing baseball in the major leagues, only to end up hauling rubbish for the city.  He spends his time parenting Corey to pursue an interest in a trade, something more realistic instead of wasting his time playing football.  Troy’s bitterness causes him to lose touch with his son and his wife and we witness an unraveling of the Maxson family structure.

While the film is set in the ‘60s, the dialogue and natural chemistry the actors display on screen could set it in any era.  Any Black person who watches this film will be able to either relate to the storyline, the characters or both as we all have a relative who could easily fill their shoes.  Stand out performances include Jovan Adepo (Corey) as a young black male who is starry eyed in his pursuit of a career in sports, but also adamant about having his father respect his manhood.  Viola Davis gives a hell of a portrayal of a hard-working, God-fearing woman who is ultimately betrayed by those she holds on to the closest.  She has already received a Golden Globe so it will be exciting to see what other awards this performance garners her.

While there are some scenes that are exaggerated and lengthy, for the most part the film fits the play to a tee and it is refreshing to see a director has done his due diligence and respects the work he is adapting enough to almost clone the project.  The themes of religion, racial and economical tension, and man and woman relations remain intact.  Part of this could be due to the fact that Washington and Davis played these characters on Broadway in 2010, gaining critical acclaim.  Fences would make August Wilson a very happy man if he were alive, as this film remains true to the Pittsburgh story he sought to tell.