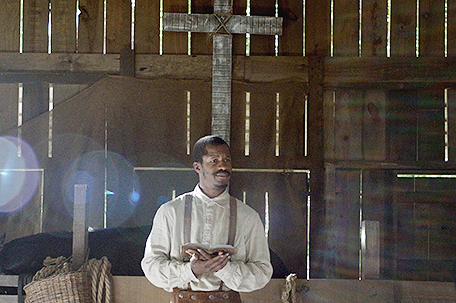 Nate Parker sure had one gargantuan task ahead of him when he decided he wanted to tell one of the most moving tales of Black American history–the Nat Turner story.  For those who don’t already know, Nat Turner (whose birthday was October 2) was an enslaved Black preacher from Southampton, Virginia who would lead other enslaved Africans into a rebellion that resulted in the deaths of approximately 65 whites  First-time filmmaker Parker makes it his task to create a film that sheds light on the incredible plight and glory that is Black America.

The film starts where is appropriate, with African roots, as a young Nat Turner (played by Tony Espinosa) is led deep into the woods by his mother Nancy (Aunjanue Ellis, ‘The Book of Negroes’ where a ritual is performed to reveal the child is one that will lead the masses–a foreshadowing event.  Young Nat is captivated by a book in the front yard of the plantation, and is curious about it’s content.  We all know how dangerous learning how to read was for enslaved Africans; there was an intense risk of being sold or even killed.  He is fortunate enough to be educated by the slave mistress to read the Bible.  Gradually we watch Nat progress and mature to see him gain respect from fellow slaves as he walks into his glory as their preacher.

At a point of economic strain for the Turner plantation, Nat is used as a traveling slave preacher.  During his travels, he sees unspeakable ill treatment of his brethren, and gets led further into his studies of the scripture to reveal truths to him.  Things reach a breaking point when his new wife Cherry (Aja Naomi King, ‘How to Get Away with Murder’) has an unsavory encounter with slave catchers.  Nat already had a demeanor that demanded respect, but this and his own punishment at the hands of his master Samuel (Armie Hammer–yes, that’s his real name) caused severe unrest within the young man.  Nana Bridget (Esther Scott) tells him of the ills she’s seen in the world while patching her grandson’s wounds.  Thus spawned the origins of bloodshed and unrest in Southampton County, VA.

The 2016 ‘Birth of a Nation’ is a brilliant turn on the head of the original racist 1915 D.W. Griffith film, based on the book by T.F. Dixon,‘The Clansmen’.  Created almost a century after the original, the 2016 ‘Birth’ fills audience members with a soulful sense of pride and liberation.  There are so many “cheer” and “triumph” scenes in this film for Black people that were awkward and uncomfortable for whites.  This was a decent first try for Parker, as he wrote, directed, produced and starred in the film, acquiring one of the biggest distribution deals on record — a whopping 15 million by 20th Century Fox.  This film really is Parker’s baby, and all Black people should be proud of this work.

While it is great, there is still room for critique.  The editing was non-sequential and amateur at times, and certain camera angles were questionable, along with the historical accuracy of the film.  There’s a line that Cherry says about whites ‘killing us just because we’re Black’ that has no room in the film simply because the term ‘Black’ wasn’t a word enslaved Africans of the day would use to describe themselves, especially not in the context it is used in her dialogue.

With that being said, the utter grotesque and uncomfortable imagery in the film created the desired effect.  There are some scenes that are very difficult to watch, but necessary this is what our ancestors went through — and more to overcome bondage (listen for the sequence with Nina Simone, that’s a guaranteed tear jerker). Religion in itself is a main character because of the protagonist but also because of the role it played in everyday Southern life and culture.

The costume and wardrobe department put in overtime work to make sure the threads were correct for this one though, as they were extremely authentic and amazing.  ‘The Birth of a Nation’ has been pushed into early spotlight as an Oscar contender, but I see it more as a thought-provoking art piece that generates a sense of pride and ownership for people of African descent.  This is a film that should be viewed by us all despite the boycott (there are other ways to be heard, ladies, volunteerism as an example) and processed together through dialogue and research of Nat Turner and his story.  I, for one, am proud this tale is being told, as I was years ago when I first learned of such an act of bravery.  Nat lives in all of us, and Nate Parker strives to show us that fact.