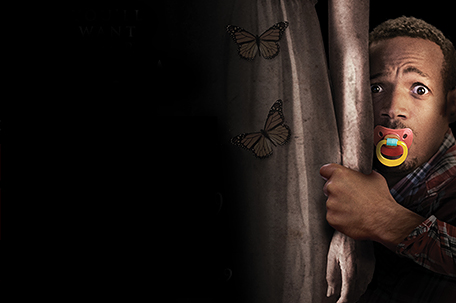 Some families are blessed beyond measure when it comes to talent. Without a doubt, this can be said about the Wayans family.  I was first introduced to the Wayans (and Marlon in particular) on “In Living Color.” Years later, I shared countless laughs with my own brother watching Marlon and Shawn in the “The Wayans Bros” sitcom and in the Scary Movie franchise.  Since then, Marlon has garnered success on countless solo projects.  Recently, I got to sit down and talk to Marlon about his newest project, A Haunted House 2.

Marlon has a career that spans well over twenty years.  I was interested in hearing how Marlon got his start. “I knew since I was about four or five that I was going to do this. I starred in all my elementary school plays. I played Peter Pan… I was offered the role of Oliver Twist and I turned it down because I thought it was degrading (said with a laugh).  It was always something I wanted to do, whether my brothers were going to be famous or not. Once I saw my brother Keenan in 1980 on Johnny Carson, inside my black and white TV, it crystallized for me. I can have a dream, I can work hard, I can pursue my dream, and I can be successful. My brother always told me there’s light at the end of the tunnel, you just gotta keep digging, and I never stopped digging.”

Marlon’s persistence has served him well in his career. Despite his seasoned ability, a shift in Hollywood sparked Marlon’s interest in creating his own content. The indirect result was the creation of the first A Haunted House. After G.I Joe, I was trying to find a way to do a low budget comedy. The studio system was changing, and they weren’t doing as many comedies. If you weren’t a superhero they weren’t doing it, and there aren’t that many black superheroes.” He continued with “I was just like, I’m going to write and create something for a small budget, that I can do out of pocket and show them (the movie studios) that this is a business, the Marlon Business. I wrote the movie with my partner Rick Alvarez. We executed a 1.7 million dollar movie that ended up making 65 to 70 million overseas.”

The success of A Haunted House gave way to the sequel, A Haunted House 2In A Haunted House 2, you can expect to see outrageous, over the top hilarity, a few surprises, more than a few unexpected plot twists, and loads of laughs.  After discussing some of my favorite parts in the film, Marlon playfully exclaims “The things I do to make y’all laugh people, the things I do.” Known for being completely uninhibited, I asked Marlon how he is able to travel to the point of no return so easily, he shared the following; “I don’t think about going there, I just kind of go there. I swear it’s not like I plan this…I’m in the moment! I go “what would be funny?”, and I act on it.” Marlon’s ability to let go completely, results in lots of laughs and an all around good time in A Haunted House 2.  If you’re looking for a comedy that will shock you with laughs, be sure to check it out. Then head over to Marlon’s comedy www.whatthefunny.com for additional original comedic content. A Haunted House 2 opens nationwide on Friday April 18th.