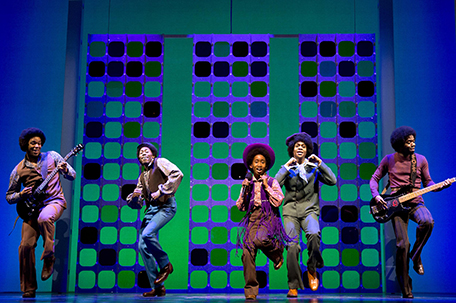 Philadelphians and a few Midwesterners took a chilly trip into Center City last week to the Kimmel Center’s Academy of Music to marvel at musical mastery—”Motown the Musical.”  The auditorium was packed and anticipation built exponentially as audience members were teased with a gigantic gold emblazoned M at center stage, signifying the revered independent record label’s logo.  As soon as the first horns blared and the curtain rose, everyone knew they were in for a treat.

Based on book “To Be Loved: The Music, The Magic, The Memories of Motown,” Kevin McCollum, Doug Morris, and Barry Gordy himself brought the book to the stage in a musical that’s not soon to be forgotten by anyone with ears.  We learn of how adolescent Gordy (Leon Outlaw, Jr.) originally had aspirations of becoming a boxing legend, but quickly switched gears as because he wouldn’t become as legendary as Joe Lewis.  As a young man (Julian Thomas III) started writing songs and eventually got his family behind the vision that soon became “Hitsville U.S.A.”  Friend and confidant Smokey Robinson (Jesse Nager) was there from the very beginning, and soon the popularity and soul of Motown was heard across the nation.

There were many themes and undertones surrounding the musical including family, love, loyalty, black empowerment and race in the 60s.  The assassinations of President John F. Kennedy and civil rights leader Rev. Dr. Martin Luther King, Jr. were both touched on, and there was a calmness that filled the audience as if they were reliving the tragic events.

From flawless costumes by Esosa, lighting design by Natasha Katz, scenic design by David Korins, hair and wig design by Charles G. LaPointe, and production design by Daniel Brodie, Motown the Musical served to be an aesthetic pleasure.

Diana Ross (Trisha Jeffrey), Marvin Gaye (Jarran Muse), and Martha Vandella (Patrice Covington) did an exceptional job, lending their vocal and acting chops to the stage, creating magic in every scene.  Stevie Wonder (Elijah Ahmed Lewis) dazzled on stage as well through a spot on impression of the entertainer.  The visual effects of the stage and the graphics dropped us right back into the Motown era.

The only downfall of the production was the lack of synchronicity in the performers’ choreography.  Groups The Four Tops, Temptations and The Contours were not always on the same page of when to turn and when to dip, causing a distraction.  That minor detail took away from the precision that the real life groups made a priority.

The audience had a great time interacting with Diana Ross at her Vegas show, entering the aisle, searching for lucky volunteers to lend their vocal chops to classic “Reach Out and Touch (Somebody’s Hand).”

For younger audience members, there was a lot to be learned through the history of the label as well as the behind the scenes business.  Some had no idea there was a love affair between Gordy and Ross, and a few of the songs recorded through Motown came as a shock including Edwin Starr’s “War,” Rick James’ “Give It to Me, Baby,” and Teena Marie’s “Square Biz.”  And who would’ve known if it wasn’t for an outspoken Marvin Gaye, we might have never been graced with protest album “What’s Going On.”

Not only does this musical offer an education to those who do not know how Motown came to be, it gives us a peek inside the record label that made generations proud of the soul that sprung from black folk.  The show is here from January 6-18th, so make sure you snag a few tickets while the show is still here, otherwise you’ll be singing “I Wish!”