Morris Chestnut– Morris muses about life and his latest offering! 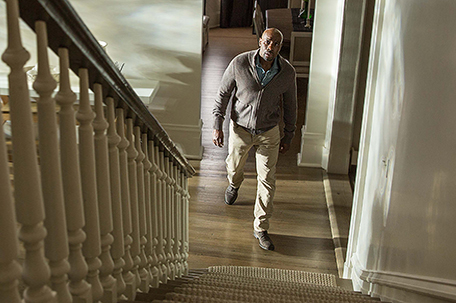 Morris Chestnut has been appearing in television and movies for the past two decades. In 2014, he shot the feature film Heist (aka Bus 657) opposite Robert De Niro and Jeffrey Dean Morgan, as well as The Perfect Guy with Sanaa Lathan.

The year before, he starred in The Best Man Holiday, a hit sequel which had the fifth-largest opening ever for an R-rated romantic comedy. The picture also garnered Morris an NAACP Image Award nomination for Outstanding Actor In A Motion Picture. Previously, he’s starred opposite Halle Berry in The Call and opposite Jason Bateman and Melissa McCarthy in Identity Thief.

On TV, he was a series regular on “Legends,” and was featured on “American Horror Story,” too. And he enjoyed a recurring role on “Nurse Jackie,” for which he won the 2014 NAACP Image Award for Outstanding Supporting Actor In A Comedy Series.

Here, he talks about his latest outing as John Taylor opposite Regina Hall and Jaz Sinclair in When The Bough Breaks, a psychological thriller directed by Jon Cassar.

Kam Williams: Hi Morris, thanks so much for another interview.

Morris Chestnut: Thank you for your time, Kam.

KW: Congratulations on your TV series, “Rosewood,” which has been doing so well. The last time we spoke was just before the first season’s premiere.

MC: Thank you. This movie was a bit of a departure from that, but I’ve definitely been having a great time doing the show. 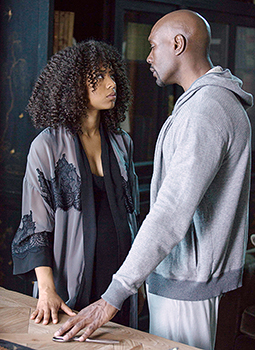 KW: What interested you in When the Bough Breaks?

MC: Once I read the script, I liked its fresh perspective and how it took a different take on the genre. I was also looking forward to working with Regina Hall again and with director Jon Cassar. Also, it was an opportunity for me to be the lead in a thriller, so I jumped at it.

KW: Well, Jon’s certainly a veteran director with dozens of credits and a couple of Emmys on his resume, but this is scriptwriter’s Jack Olsen’s first produced script. Were you at all worried about that?

MC: No, there are people who’ve never had anything made before, and their first script can be great. Plus, scripts are often tweaked and nuanced. You can’t make something out of nothing with a screenplay, but when it’s really good at the core, you can make some adjustments. So, I never concern myself with whether a scriptwriter has written one before. I might do that before reading an unsolicited script. But if a studio or certain agents suggest I check something out, I don’t even ask. I just judge it based on my first reading.

KW: How was it reuniting with Regina Hall?

MC: I love working with her. Until now, Regina only did comedy. But I knew she had the talent to do drama, because she’s such a terrific actress.

KW: What did you think of Jaz Sinclair’s performance? This is only her second film, but it might very well be the breakout role of an emerging ingenue.

MC: Jaz is incredible! She’s a tremendous talent that Hollywood and the world need to be on the lookout for. I also enjoyed working with Michael Kenneth Williams the rest of the cast. We had a great time together.

KW: The film certainly does offer a unique variation on the “obsessed other woman” theme in that she’s a surrogate mother.

MC: Right! Some people have compared it to Fatal Attraction or The Hand that Rocks the Cradle, but it’s an interesting take since she has her baby inside of her.

KW: Did you model your character, John Taylor, specifically on anybody?

MC: No. It wasn’t until after a few people who go to the same gym saw the trailer, that I learned about someone who’d been in a similar situation. In preparation, I basically drew on different experiences that would justify the behavior of this character.

MC: First and foremost, I want them to be entertained. But the one thing I did like about Regina’s and my character was that we seemingly have it all. But no one has everything in life, even though it often appears that some do. I tell that to young kids when I speak to them. I tell them, “Do the best you can in living your life, and don’t glorify anyone else’s life.”

KW: Is there a dream project you’d like to see greenlit?

MC: Yeah, there’s one I’m waiting on. I wanna kinda keep it under wraps for now. But when I’m ready to announce it, I’ll definitely let you know.

MC: When I’m able to put smiles on people’s faces for various reasons.

KW: The Toure question: Who is the person who led you to become the person you are today?

MC: Both of my parents. They instilled morals, values and certain philosophies in me.

MC: Pursuing a career as an actor. It might seem like a wise choice now, but it was a crazy thing to do when I was starting out.

KW: What was your very first acting job?

MC: My first union job was Boyz n the Hood, but my very first acting gig was in a play at a community college.

MC: Faith. You have to believe in what you’re doing, and just keep moving forward. I learned that may years ago.

KW: The Laz Alonso question: How can your fans help you?

MC: They’ve already done a lot. They can help by continuing to support me the way they have throughout the years.

MC: I don’t have one favorite. I work with the Boys and Girls Clubs, Children’s Miracle Network and the American Cancer Society.

MC: Ooh, that’s a good question. Years ago, I wanted to be an athlete. Today, it would be in finance, banking, or something of that nature.

KW: Is there anything you want that you don’t have yet?

KW: Craig Robinson asks: What was your last dream?

MC: I had one last night, but can’t remember the details.

KW: Can you come up with a generic question that I can ask other celebrities I interview?

MC: Yeah, was there any particular moment in their childhood that inspired them to be where they are today?

KW: That’s a great one. That’ll be my Morris Chestnut question. Thanks again for the time, brother, and best of luck with the film. .

To see a trailer for When the Bough Breaks, visit: https://www.youtube.com/watch?v=Ws74Ie4fMc8

Terrence Howard–Oscar-nominee expounds on life, career and his latest offering