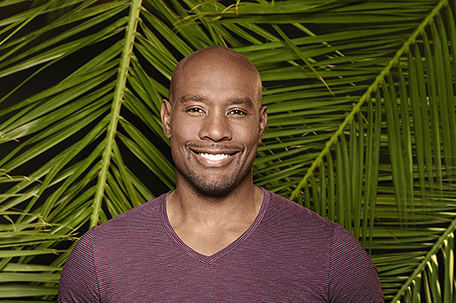 For the past quarter-century, Morris Chesnut has been working in television and movies. Morris made his big screen debut in 1991 as Ricky Baker in Boyz n the Hood. He’s currently co-starring opposite Sanaa Lathan and Michael Ealy in the psychological thriller, The Perfect Guy.

This November, he’s set to appear in Heist, Robert De Niro’s crime caper about a desperate father who robs a casino to pay for his daughter’s medical bills. And he recently finished shooting When The Bough Breaks with Regina Hall, a horror flick about a surrogate mom who becomes obsessed with the father-to-be of the baby she’s carrying.

Morris landed two of his three NAACP Image Award nominations for his unforgettable performances as Lance in The Best Man and The Best Man Holiday. Fans of the franchise will be happy to hear that he is already slated to reprise the role in the franchise’s third installment, The Best Man Wedding. His additional credits include The Call with Halle Berry, Kick-Ass 2 with Chloe Grace Moretz, and Identity Thief with Jason Bateman and Melissa McCarthy.

Kam Williams: Hey Morris. Thanks for the time. I’m honored to have another opportunity to speak with you.

Morris Chestnut: Thank you very much, Kam. I appreciate your interest in speaking with me.

KW: I told my readers I’d be interviewing you, so I’ll be mixing their questions in with mine. Harriet Pakula-Teweles asks: How much fun is it playing a doctor and driving around in that fantastic yellow convertible?

MC: [Chuckles] You know it’s great! It’s a lotta fun. The character is witty, smart, and he has a great perspective on life and the world. And driving around the streets in that convertible is a blast.

KW: These two questions are very similar. Larry Greenberg asks: When you’re playing a doctor, do you feel like you need to understand the medical aspects of the role? And Editor/Legist Patricia Turnier asks: Are you being coached on the set by a physician to help make your impersonation of a doctor more credible?

MC: The answer is “yes” to both questions. I definitely prefer comprehending the medical aspects of the dialogue to spewing out words without understanding what I’m saying and why I’m saying it. It makes the character more believable when I understand that. And yes, we actually do have technical advisers on set at all times, and the writers often consult doctors while they’re working on the scripts. So, we definitely have authorities helping us get it right.

KW: Attorney Bernadette Beekman says: I am already a huge fan from your dramatic roles in film and I am thrilled to finally see you as a lead on a television series, especially one based in Miami where we get to see you jogging in a T-shirt under palm trees, riding in vintage convertibles, hanging out in discos on the beach, having witty dialogues with his co-star, etcetera. It all looks great. I can already predict there will be thousands of home-based watching parties. I always say that “Life is too short not to “overbook,” and his character has had a couple of brushes with death. Do you follow your character’s philosophy to live life to the fullest?

MC: I do. I like to live life to the fullest like Rosewood. Because he’ll be dying soon, he’s living each day as if it’s his last. However, unlike Rosewood, I have kids and a family. For that reason, Rosewood doesn’t really get close to people. I don’t take my time on Earth and each day that I breathe for granted, although I think there are times when I could appreciate it a little bit more.

KW: Bernadette also asks: Do you have a charitable cause you’re passionate about?

MC: I have a couple. One is the Children’s Miracle Network. I’ve been involved with them for a number of years.

KW: Felicia Haney asks: If you knew you only had a decade left to live like your character, what would be #1 on your bucket list to achieve?

MC: That’s a very interesting question. I’m really not sure, since there are so many things I’d have to consider. I could sit here and give you an answer but, if I were really facing that situation, it would probably bring a new perspective. So, to be honest, I’m not really sure.

KW: Felicia also says: How has this role been different from anything you’ve ever played before in terms of your expectations?

MC: I can’t say that it’s been different from every role I’ve played before. The characters more comedic and more humorous than I’ve been in quite some time.

KW: How is it starring in your own TV series? Is it a bit of a grind?

MC: I think grind is an understatement. There’s an extreme amount of work that goes into doing a television show, especially as a lead. I’m working 12 or 13-hour days during the week, And over the weekend, you’re preparing for the following week. You don’t really have any days off. So, yeah, it is a grind.

KW: Brian Carter would like to know whether you have any advice for aspiring young black actors who want to make it in Hollywood.

MC: Yes. People ask me this question all the time. I’d say: Focus on the work. People focus on the end result a lot of the time, because they want it here and they want it now. In fact, they want it yesterday. But they don’t really appreciate all the effort that goes into getting it. Initially, they’ll say, “I’ll do whatever it takes.” But then, when you say, “Okay, do this, do that, do this,” they respond with, “Oh, that’s a lot.” Well, you want a lot. Just focus on becoming the best actor you can be. I always feel that, when actors focus on the work, they’re going to get opportunities.

MC: Hmm… Probably just sitting at home reflecting on life, and when I’m in the gym, listening to music and working out.

KW: Have you ever had a near-death experience?

MC: Fortunately not, knock on wood. Not to this point.

KW: Do you have any phobias?

MC: [LOL] Yes, I do. But I don’t want to reveal them, because people might start playing practical jokes on me. .

KW: The Laz Alonso question: How can your fans help you?

MC: My fans have been great. They’ve supported me throughout the years, and I’m very appreciative of that. They can help right now by watching Rosewood which airs Wednesday nights at 8 pm on Fox.

KW: Is there anything you’d like your fans to know about you?

MC: I think they know a great deal about me. One thing they might not know is that I’m a somewhat shy, which plays a part in a lot of things.

KW: The Toure question: Who is the person who most inspired you to become the person you are today?

MC: Definitely my parents. They shaped me to become the individual I am, in terms of my values… my morals… the decisions I’ve made… pretty much everything.

MC: My driver’s license and one credit card.

KW: Thanks again for the time, Morris, and best of luck with Rosewood.

To see a trailer for Rosewood, visit: https://www.youtube.com/watch?v=FhhYJXV508A