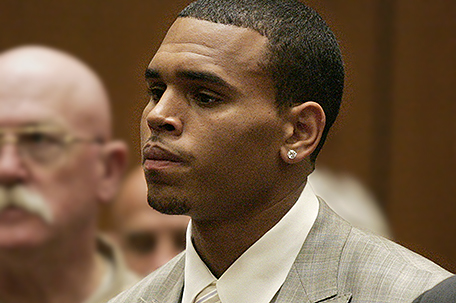 Chris Brown on Friday admitted a probation violation over an altercation last year outside a hotel in Washington, D.C., and was sentenced to remain on probation and serve an additional 131 days in jail.

Brown appeared in court Friday and admitted he committed a crime in Washington in October. His mother and other supporters watched Friday’s court proceedings.Superior Court Judge James R. Brandlin sentenced Brown to serve a year in county jail but gave him credit for nearly eight months of time served. The credits include time the Grammy winner has spent in rehab and jail, as well as credits for good behavior while behind bars.

His admission came in a felony assault case filed after Brown attacked pop singer Rihanna hours before the 2009 Grammy Awards. The pair was dating at the time.

Brown has been in custody since mid-March, when he was arrested after being dismissed from a court-ordered rehab sentence.

Brown faces a misdemeanor assault charge in Washington after a man accused the singer of hitting him outside a hotel in the nation’s capital.

Brown responded “Yes sir,” repeatedly to questions posed by Brandlin during Friday’s hearing, including a question about whether he was acknowledging he committed a crime in Washington. It is unclear whether that will have any impact on Brown’s pending case.

Brandlin said Brown will have to complete the remainder of his 1,000 hours of community labor once he is released from jail.

The judge said he took into account that Brown was relatively young when he attacked Rihanna, and that he had a previously undiagnosed mental illness before the case began.

Brown, 25, will remain on probation until Jan. 23, Brandlin ordered.

Chris Brown will spend another month in jail