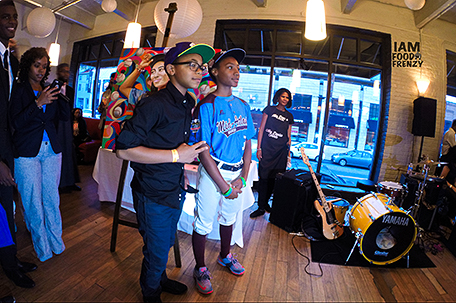 Every other month, young professional Nehemiah Davis, hosts Social Sundays at Manayunk Brewery on Main Street. This event brings young professionals together for an evening of networking and fun. At each of these events, Davis and his team selects young professionals from the Philadelphia area to honor for their contributions to the community. Typically these honorees are peers of the mostly millennial crowd, who serve as an inspiration for the others, an example of following dreams and pursuing goals. This month, however, the NeoDaviso team decided to honor two amazing young people who haven’t even hit puberty yet, Mo’ne Davis and Cam Anthony

In case you’ve been living under a rock, Mo’ne Davis is the 12-year old Taney Dragons Little eague baseball phenom, who took the city and the country by storm. Davis had men and women, young and old, all across the nation declaring “I want to throw like a girl”. This summer Mo’ne was on the cover of Sport Illustrated, showed exceptional sportsmanship during national interviews, and pitched at incredible speeds, topping 70mph, during this year’s Little League World Series.

Cam Anthony, who has been singing since he was 4 years old, has had the opportunity to not only perform on the Ellen DeGeneres Show, but also to sing the National Anthem for President Barack Obama at the Easter Egg Roll earlier this year.  Cam is just 12 years old.

No doubt that these two exceptional young people who have been receiving national attention are ing somewhat accustomed to the various invites to events and awards, yet both have been able to maintain exceptional humility, with the support and direction of their parents.

“We just want to honor greatness at a young age”, said Davis on why he and his team chose to honor Mo’ne and Cam this month. “These kids are a reminder to all of us that greatness is not determined by age.”

In addition to the awards, Serena Saunders, a local visual artist, painted a portrait of Mo’ne as a gift for the young athlete.

Nehemiah Davis is the founder of the NeoDaviso Foundation, a non-profit organization that provides activities, events and services for youth in and around the Philadelphia area. Some of the foundation’s initiatives include Peace-N-Philly, which aims to combat gun violence and crime in the Philadelphia region.

Nehemiah Davis Foundation hosts the Step into Greatness Conference, and brings out hundreds of Young Professionals