Miss Universe to have official homecoming celebration in Africa 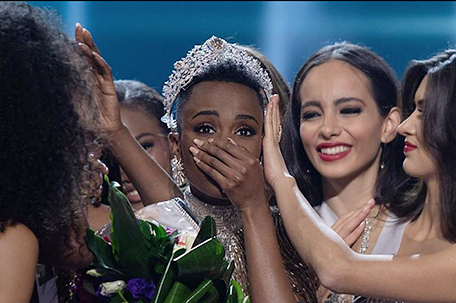 Mama’s Grits and Tea by Mama

Here’s your dose of needed distraction to get you through the day. We know some love to mind celebrities’ business more than their own.

….Get your plane tickets ready! New Miss Universe 2019 Zozibini Tunzi is having an official homecoming in South Africa. The date and details will be released soon. Needless to say this will be a big to-do.

Rihanna “RiRi” Fenton will have a nice holiday to say the least. Amazon has reportedly purchased the rights to the documentary about her life for a whopping $25 million.

Steve Harvey has made a smooth recovery from having his NBC show canceled. Word on the curb is that he has already landed a show on Facebook Watch titled ‘Steve on Watch’ which will debut on January 6, 2020.

Good news for our girl Tamron Hall. Disney has renewed her daytime talk show for a second season.

Kelly Clarkson‘s show which replaced Steve Harvey’s canceled show on NBC has slso been renewed for a second season.

“Addiction knows no boundaries and its impact goes way beyond the person fighting it. Jarad was a son, brother, grandson, friend and so much more to so many people who wanted more than anything to see him defeat addiction.

We hope the conversations he started in his music and his legacy will help others win their battles as that is what he wanted more than anything. We know that Jarad’s legacy of love, joy and emotional honesty will live on.”