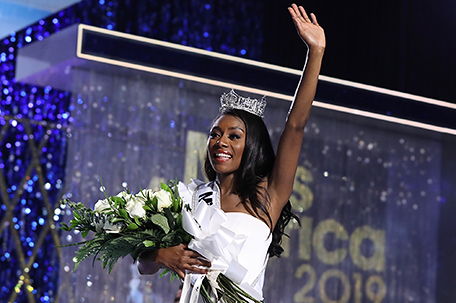 As Miss America 2019, Franklin will travel across the country for her year of service.  She will embark on her national speaking tour about her social impact initiative “Advocating for the Arts” and as the National Goodwill Ambassador for Children’s Miracle Network Hospitals. Children’s Miracle Network Hospitals, a non-profit organization dedicated to saving and improving the lives of children by raising funds for children’s hospitals, is the national platform partner of the Miss America Organization.

Through her social impact initiative, Franklin will bring her passion for music and performance to advocate for the inclusion of arts as an important part of education. For the talent portion of the competition, Franklin chose a classical vocal performance.

Franklin is a graduate of The University of North Carolina School of Arts where she majored in music composition. Along with the coveted title of Miss America 2019, Franklin won a $50,000 scholarship to continue her education.

First runner up in the competition was Miss Connecticut, Bridget Oei, who earned a $25,000 scholarship.

The 98th Miss America Competition was hosted by Carrie Ann Inaba of ABC’s “Dancing with the Stars” and TV personality Ross Matthews. The 51 candidates representing all 50 states and the District of Columbia competed in preliminary competitions earlier in the week.