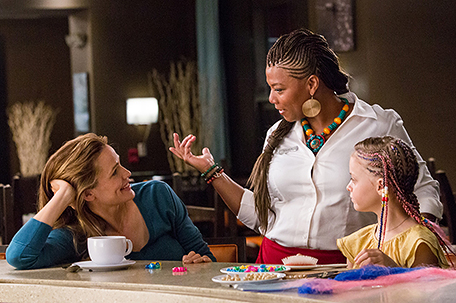 Annabel Beam (Kylie Rogers) was born in Burleson, Texas where she was raised by her parents on a farm surrounded by cats, dogs, goats, cows and a donkey. She enjoyed an idyllic childhood there with her sisters, Abbie (Brighton Sharbino) and Adelynn (Courtney Fansler), until the age of 10 when she started experiencing severe stomach pains.

Christy Beam (Jennifer Garner) rushed her daughter to an emergency room doctor who snap-diagnosed the malady as a combination of lactose intolerance and acid reflux. But when his course of treatment for those conditions failed, the frightened mother next took Anna to a a gastroenterologist (Bruce Altman) who determined that she was suffering from an obstruction of the small bowel which called for immediate surgery.

He referred them to a highly-regarded physician in Boston specializing in intestinal disorders. However, Dr. Nurko (Eugene Derbez) had a nine-month waiting list which meant the little girl was likely to pass away before the appointment.

Frustrated by an inability to help her rapidly-deteriorating daughter, Christy began to question her faith when Anna asked, “Why do you think God hasn’t healed me?” Of course, it didn’t help the situation any when a couple of fellow parishioners had the nerve to suggest that the affliction might be punishment for sin. In response, Christy told her husband (Martin Henderson) she was through with church, at least until Anna was healed.

Desperate times call for desperate measures. So, Christy decided to show up at Dr. Nurko’s office unannounced and thereby embarrass him into seeing Anna. While the ploy did work, an MRI, endoscopy and a battery of other tests essentially confirmed that Anna was not long for this world and should get her affairs in order.

The two return home, but not before being befriended by a waitress with a heart of gold (Queen Latifah) who takes them on a whirlwind tour of Beantown in her junky jalopy. The prospects aren’t very brilliant for Anna back in Burleson until the fateful day she falls down a hollowed tree trunk, hits her head and blacks out.

When she comes out of the coma, lo and behold, her bowels have been miraculously healed. Furthermore, she proceeds to relate how she had just visited Heaven and even had a heart-to-heart with her Creator.

That is the sum and substance of Miracles from Heaven a faith-based docudrama adapted from Christy Beam’s best-selling memoir of the same name. Directed by Patricia Riggen (The 33), this wholesome family flick features a touching tale of survival with a measure of Christianity mixed in.

The Lord working in mysterious ways designed to elicit an “Amen!’ from believers in the Amen Corner.

To see a trailer for Miracles from Heaven, visit: https://www.youtube.com/watch?v=CldGTG6iVrU