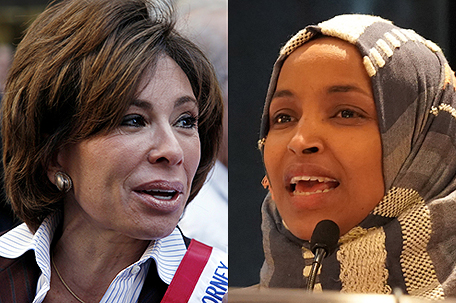 Fox said it “strongly condemned” Pirro’s Saturday night commentary and said it had addressed the matter with her. Pirro did not apologize.

On her show, Pirro noted that the Minnesota representative wears a hijab in apparent conformity to a directive in the Quran. “Is her adherence to this Islamic doctrine indicative of her adherence to Sharia law, which is in itself antithetical to the U.S. Constitution?” she asked.

In its condemnation, Fox said Pirro’s views “do not reflect those of the network and we have addressed the matter with her directly.”

Omar, in a tweet, thanked Fox for the statement, saying no one should question a person’s commitment to the Constitution because of a person’s faith or country of origin. Omar is a Somali immigrant.

Omar has been in the news because of her own comments that some have judged to be anti-Semitic, leading to a debate over how Democrats should publicly address her views.

Pirro, in her own statement, said she did not call Omar un-American.

“My intention was to ask a question and start a debate, but of course because one is a Muslim does not mean you don’t support the Constitution,” she said, adding she invited Omar to come on her show.

Pirro was called out on Twitter by a fellow Fox News Channel employee who is Muslim. The employee, Hufia Kumal, works on Bret Baier’s news show.

She wrote: “Can you stop spreading this false narrative that somehow Muslims hate America or women who wear a hijab aren’t American enough? You have Muslims working at the same network you do, including myself.”

It was not immediately clear what Fox had done in addressing the matter with Pirro, the former district attorney from New York’s Westchester County who is a particular favorite of President Donald Trump.