Milo Ventimiglia poured his dad into Jack on ‘This is Us’ 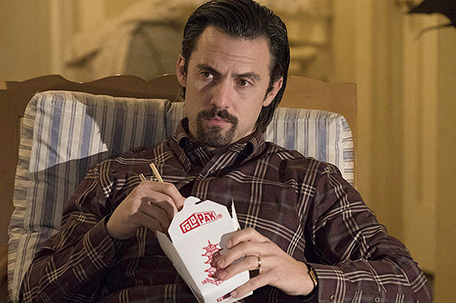 ABOVE PHOTO:  Milo Ventimiglia as Jack in “This Is Us”.

NEW YORK — In Milo Ventimiglia’s trailer on the set of NBC’s “This is Us” hangs a black-and-white photo of himself at maybe 3 or 4, leaning on his dad’s knee, father and son smiling in the front yard in front of a tree.

Above and below the snapshot are handwritten signs, reminders that have helped the actor mold his popular character, Papa Jack Pearson, on one of network TV’s weepiest family shows of the moment:

“Be a Good Father,” Ventimiglia penned above, with “Be a Good Husband” below.

“I saw my mom and dad with a great, great healthy marriage,” said the kind-faced Ventimiglia, neither father nor husband himself.

“I think I would absolutely love to have that, have a family, have a wife, have a partner. You think about who is that one person that you’re going to be with that you can just walk shoulder-to-shoulder with in life, support, and they support you, you know,” he added in a recent interview.

Ventimiglia, at 39 already in the business more than two decades, said he poured other aspects of his parents into the character and his on-screen marriage to Mandy Moore’s Rebecca, including their very human challenges and flaws of late as the show headed into Tuesday’s first-season finale.

The elder Ventimiglia, Peter, wasn’t a crier, for instance, just as Jack is often the dry-eyed, stoic while others in the Pearson clan swirl around him. Oddly, tears – and Jack’s lack thereof – were a topic of conversation between Ventimiglia and “This is Us” creator Dan Fogelman.

“I didn’t see my father cry until I was maybe 21 years old, when his father passed away,” Ventimiglia said. “And I thought to myself, ‘Wow I’ve never seen my dad cry, until then. Why is that?’ And I started breaking that apart and thinking, ‘I believe that my father was trying to give me strength as a young man moving forward in life.’”

While on another NBC hit, “Heroes,” Ventimiglia spent time on a USO tour, hanging with veterans who served in Iraq, Kuwait and Afghanistan. He remains committed to the cause of helping vets. His dad was an enlistee during the Vietnam War, in the Army Corps of Engineers. He built bridges and roads and bases.

“I know he was in some pretty hot spots,” Ventimiglia said. “He was 20, 21 years old. To know that my father has experienced war, like some of my friends have experienced war, gives me a different perspective. … There’s gotta be a better way to solve the problems that we have.”