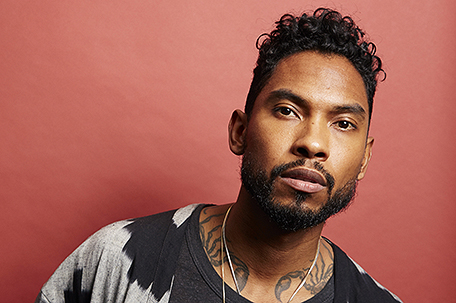 ATLANTA–After hearing numerous stories of immigrants being deprived of meals and relegated to harsh living conditions inside some detention centers across the country, Grammy-winning singer Miguel said he felt angered.

That’s why he decided to headline a free #SchoolsNotPrisons concert in California to bring more awareness to the issue last month. More than 1,000 attendees were at the show, held across the street from the Adelanto Detention Center, the largest in the state.

“You think a detention center is a place where people are being fed and taken care of, but these people are only getting one meal a day, which is often like a sandwich,’’ Miguel, who was raised in Los Angeles, said in a recent interview with The Associated Press.

“They sleep on the floor. The children that are being held there are sleeping under one blanket. …The food they are serving isn’t edible because it’s been spoiled or there are maggots in the food. The treatment is crazy,’’ he added.

Detention centers are institutions that usually hold people, particularly immigrants, for short periods of time while they await trial or a sentence. But the R&B singer said he’s heard firsthand stories from people who have been held for nearly a decade.

Miguel believes those types of institutions should be shutdown. He said though some of the inmates are criminals, the majority of them are looking to better their lives and seek opportunities in the U.S.

The singer said he empathized with them, especially since his grandmother came to the U.S. from Mexico to find work in the 1960s. She eventually moved her family to America.

“It made me even more angry for them,’’ said Miguel, who is half black and Mexican. “It’s another example of how innocent people are being taken advantage of. It’s unjust on a human level. As someone from this country who understands that this is a place that’s supposed to represent freedom and equality, we see a complete contrast of how these people are being treated.’’

Miguel, whose hits include “Adorn’’ and “Sure Thing,’’ said he felt compelled to hold the free concert because of the issues involving systematic incarceration of minorities. A petition was also launched to encourage media outlets to call the facilities “immigrant prisons’’ rather than detention centers.

“The more informed we are, we can avoid it,’’ he said. “The more we help each other, the more likely we are able to make a change for the future, so our children won’t have to deal with it.’’