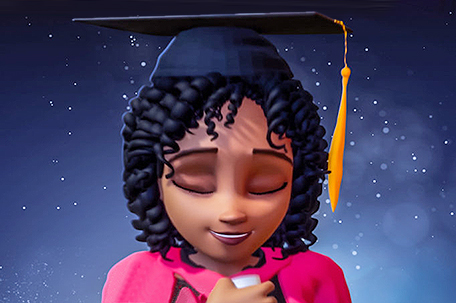 Kalia Love Jones is an ambitious 13-year old animated filmmaker who wants to empower others. Her first animated short film, “The Power of Hope” — inspired by a Michelle Obama speech — tells the inspirational story of a young woman with big dreams. An aspiring architect feels helpless when her mother falls ill, but moved by the words of Michelle Obama, she finds the will to persevere and bring her dreams to life.

The film will premiere at the Urbanworld Film Festival and LA Shorts International Film Festival in October and has received exceptional reviews. Additionally, Kalia is a shortlist candidate for Time magazine’s “Kid of the Year.”

No stranger to hard work and commitment, Kalia divides her time between school, filmmaking, piano lessons, gymnastics, and district honor’s band first chair flute. Kalia is an 8-year gymnast who trained with former U.S. Olympian Chris Whaler at his gym in Los Angeles County. Devoted to her passion as a filmmaker, she is making a positive difference in the world by inspiring young women to pursue their filmmaking dreams.

Kalia lives in Los Angeles and has always loved the film industry. She looks up to influential female figures like Michelle Obama, Oprah Winfrey, Ava DuVernay, and Rebecca Sugar and spends hours every day drawing, crafting, and studying films to create unique animations.

With her motivation and strong support from her family, Kalia launched her first captivating production, “The Power of Hope.” She even co-wrote the film’s song and funded most of the project on her own by recycling and working odd jobs for her family and friends.

Kalia is not afraid to take risks with her films to deliver powerful messages that prove anyone can push through obstacles in life and reach their goals, as eloquently stated by Former First Lady Michelle Obama in her speech.

This may be the beginning of Kalia’s career, but she is undoubtedly already showing young women that they can achieve greatness through hope and believing in themselves.

For more details about “The Power of Hope” film, visit: www.ThePowerofHopeFilm.com or follow the film on Instagram at: @thepowerofhopefilm.