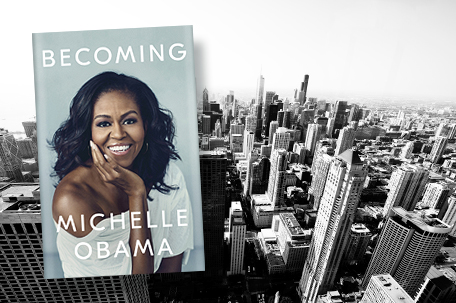 The former first lady will begin visiting different cities across the nation in November.

Michelle Obama has announced a new tour for her upcoming “Becoming” book.

The former first lady is hitting the road to tell everyone about her memoir, which is slated for release on Nov. 13. She will visit arenas and performing centers in 10 cities across the nation.

Here are five things that fans can look forward to with Obama’s tour:

Of course, the former FLOTUS is heading to her home city. The first stop on her tour will be the Windy City at the United Center on Nov. 13.

Obama will leave Chicago and make stops at the Barclays Center in Brooklyn, New York, The Forum in Los Angeles and in Philadelphia on Nov. 29 at the Wells Fargo Center. A full list of stops is at https://becomingmichelleobama.com/.

The former first lady is bringing some of her family and friends along for the ride! No word yet on who will be coming through, but there will likely be some famous folks hanging with Obama.

There will be several opportunities for Obama to have compelling conversations with her surprise guests and audience members. The dialogues will likely focus on her book that explore several subjects: her childhood on the South Side of Chicago; her role as a mother to both Malia and Sasha Obama; and time spent as the first lady in the White House.

Chances to hear others’ stories

Obama will not make her book tour all about herself. The former first lady is inviting audience members to share their narratives during the events.