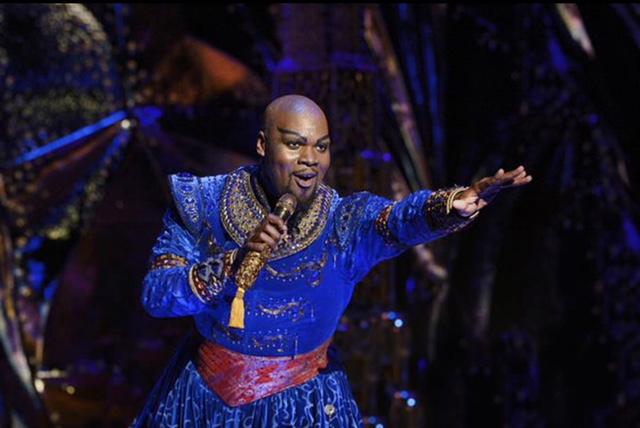 Above photo: Michael James Scott as “Genie” in Disney’s “Aladdin”

Disney created a world of wonder in the 1992 film classic “Aladdin.” With flying carpets and a lovable Genie, “Aladdin” is a coming of age story about exploration, the quest for identity, the fight against antiquated traditions, love, magic and an unlikely friendship.

The enchantment of “Aladdin” was adapted into a musical premiering in Seattle in 2011, and on Broadway in 2014. The musical is directed and choreographed by Tony Award winner Casey Nicholaw, with music written by Tony and Oscar winning composer Alan Menken. The book is written by Chad Beguelin. Characters like “The Genie” brings musical numbers like “Friend Like Me” to life, captivating audiences for a truly exhilarating experience. Michael James Scott, who currently plays the Genie in the North American tour, sat down with the SUN to detail his experience playing the iconic role.

Scott was born in Baltimore, Maryland, but moved to Orlando, Florida with his family at age nine. His musical gifts surfaced at a young age and his talent led to a lifelong love affair with music.

“My mother told me I sang before I spoke, so it was obviously something that was just in me,” Scott said. “I constantly responded to music on TV when I saw musicals. Anything like that, I responded to it. I grew up singing in church as well, so for me there was never anything else that I wanted to do to be honest.” He added, “ It’s so cliché to say, but it [music] really is the universal language. You can absolutely connect to so many people…and I have when I performed around the world.”

Being in Orlando opened up several doors for Scott to pursue a career in the arts. After being told he had something special by one of his elementary school teachers, he began auditioning for commercials. Eventually that lead to him finding his true passion… theater.

“Theater for me was like marrying everything because I got to do it live, it was different every night and it wasn’t the same take every time. I’m happiest doing that!“ Scott remarked.

Living in Orlando also gave Scott a very unique opportunity to connect with the wonderful world of Disney.

“I actually worked at Disney when I was a kid and then when I was in high school as well,” he said. “I did the parades there and some of their convention shows. I have a very long relationship with the company [Disney] and that’s why it’s so full circle to be playing the Genie on this scale as a grown man. Coming back to my Disney roots… it kind of blows me away sometimes that Disney has been a part of my life for so long! It definitely changed me in a way… I feel like it gave me a chance, it gave me a place and I’m very thankful for it!”

The road that led to Scott landing the role of the Genie was one paved with quite a few unexpected turns. A call from Scott’s agent led to an audition. Unbeknownst to him at the time, all of the Disney executives were present at said audition.

“I came in, did the reading and I really connected to the role,” Scott recalled. “I kind of let it go because I knew that I was coming in to stand in for James Monroe Iglehart (the original Genie in the Broadway production). Low and behold, I get a call from Casey (Nicholaw) and was asked how I felt about standing by for when they opened on Broadway. I thought about the future of the show, I thought about this role and it being one of those roles that only comes around every so often. So I decided to take the standby position and I did it for a little under a year. It’s so crazy because then my world as the Genie kind of exploded… it was incredible! I got to do it on Broadway and then I was taken to Australia to open the Australian company for 18 months which was unbelievable. I never really expected this “Genie journey” as I call it. This role led me to unbelievable places! I’m just thrilled and so honored that I’ve gotten to do it. ”

After originating the role as Genie in Australia, Scott earned a Helpmann Award for “Best Performance by a Featured Actor in a Musical.” At the end of 2017, he returned to the U.S. for the national tour to play the Genie stateside.   The blue Genie with a personality out of this world, paired with the outstanding performance of Robin Williams is on the forefront of every fan’s mind. This production however, brings something unexpected to the character.

“The thing about the Genie here is that it’s obviously all of the essence of Robin Williams and the brilliance that is Robin Williams… but it’s a different Genie! This team is so amazing with giving us freedom to do our own thing,” he said. “I am inspired by all the greats, of course, like Robin Williams, but the cool thing about our show and some of the styles of the music, is the throwbacks to Cab Calloway and the song and dance of Fred Astaire, Gene Kelly, Ben Vereen and Sammy Davis Jr. I also have my father and grandfather in there, there’s Oprah, there’s Beyoncé… there’s every kind of thing that I’ve been inspired by that I’ve thrown into this role.”

With a wide array of inspiration to draw from — intricate choreography, all of the fans’ favorite songs from the film as well as new music — the amount of excitement audiences are bound to experience are endless. Scott shared this final thought about the show;

To follow Michael James Scott’s incredible journey as the Genie visit his website at: https://www.michaeljamesscott.com/ and follow him on Instagram @iammjscott. “Aladdin” will be at The Kimmel Center from June 13th through July 1st. For more information on showtimes and tickets, visit https://www.kimmelcenter.org/ .

“Disney’s Beauty and the Beast” at The Academy of Music