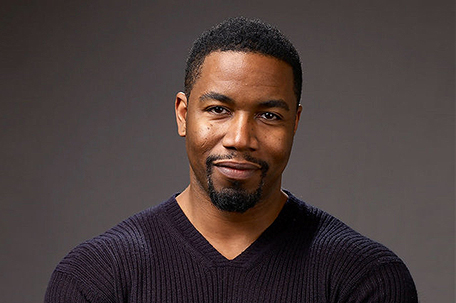 You know him from, well, everywhere, because that’s where Michael Jai White is, and will continue to be. The star of hit films like “Why Did I Get Married?,” “The Dark Knight Rises,” HBO’s “Tyson” biopic (his claim to fame), and of course the co-creator and star of the film and follow-up animated series “Black Dynamite” is as dynamic as his well-known resume reflects. And as the current number one international martial arts action film star (check it out, he totally is!), starring in hit films such as “Blood and Bone” (2009) and “Falcon Rising” (2014), White triumphs even further directing, writing, and starring in the latest mixed martial arts (MMA) movie sequel, “Never Back Down 3: No Surrender” which comes out today on DVD. 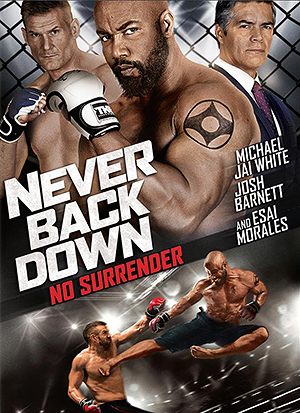 In the film, former MMA champion Case Walker (White) has kept a low profile, winning small-time regional matches after refusing to join the powerful new leagues that push performance- enhancing drugs on their fighters. Walker is convinced by old friend and renowned fighter Brody James (MMA fighter Josh Barnett) to join him in Thailand and train him for a big fight against the undefeated, and deadly, Caesar Braga (Nathan Jones). During training, Brody is injured. Under pressure from an unscrupulous, high-powered promoter (Esai Morales, “La Bamba,” “Caprica”), Walker agrees to replace James and fight his toughest opponent yet — but only on his own terms.

I got a chance to interview White about his latest film and his career in the constantly evolving film industry. We spoke at length about his concentration on becoming a globally-known artist who does not rely solely on domestic productions to guide his career. In this regard, White reminds me of Fred Williamson (“Black Caesar,” “Mean Jhonny Barrows,” and much more) – an action star who took a similar path forty years ago.

Curtis Caesar John: Hey Michael, let’s get right into it. What made you decide to direct another sequel in the “Never Back Down” series?

Michael Jai White: Well, Sony wanted to do another one and follow my character Case Walker’s life, which gave me the opportunity to do it again. Me being a person that has my feet in different worlds – director and marital artist, director and writer – gives me the advantage to execute this type of film well. It’s very difficult to ask a writer to write about something they have no idea about…I have the experience to give audiences a truer glimpse of this particular world.

CCJ: So this is very different from “Never Back Down 2” where as an actor you had more of a sensei type role. How was it being in the core of the action for this new sequel?

White: I felt I could really tell a unique story here…to give audiences something they haven’t seen before. They don’t usually get to see what really goes on in this world. And here, I’m fusing aspects of the traditional marital arts world with the MMA world.

CCJ: The movie is very extreme. Were there any struggles in directing yourself in action sequences?

White: I’m so comfortable in the three worlds that there weren’t really any. From early in my career, I always had the mindset of producing, directing and acting. For me, directing is solving logic puzzles, making things fall into place.

I’ve always been able to take chaos and make sense out of it…I’ve been the go to ‘therapist’ in my peer group, and so often can see what opposing entities have in common. So for me, directing is bringing it all into one spectrum. It’s organic for me.

CCJ: Staying with this theme, “Black Dynamite” was the first film of yours, which people know of, where you took creative control. What does it mean to you be able to control what happens with your stories and imagery?

White: I totally can’t wait for things to be written for me. I don’t think there’s been many roles I’ve read that have been palatable for me. A lot of what’s out there is just sub par. I’m not one to complain about it, so I want to try to create a space for myself. Yeah…there are not that many great roles that come around. I feel that to live to my highest potential would mean that I create and produce things that I want to get into the marketplace, and so I basically started my own production company (Jaigantic Entertainment). And so, I feel I have a grasp on what under-represented audiences want to see.

CCJ: So with your string of martial arts & action movies, what do you find so fulfilling in doing those?

White: The action movies are worldwide, and I enjoy that global recognition. I want my brand to go beyond [United States] domestic households, and the action market is the engine that creates that. I’m very excited that the movies I produce have gone beyond expectation, and give me the opportunity to do bigger and better. My goal is to have a more global outreach.

CCJ: This is obviously an intense action film, but as the end of the trailer shows, there’s some sense of humor included. How crucial is humor for you when developing an action film of this caliber?

White: I believe humor is very important, and it’s just very natural for me to infuse humor into my writing. My favorite [genre] is action comedy, and I have a few of those types of projects in the works. In life, even in drama, there’s a lot more humor going on than anything else…I like to play on that line of realistic humor.

CCJ: I have to ask you about working with Esai Morales. For me, you both have similar styles of acting: a good mix of intensity and wry humor. How was it directing him?

White: Man, it was great. Esai is just a great actor, and he is so funny! I had no idea he was as funny as he is and I got a chance to use that in a few scenes. It was wonderful…I loved working with him.

CCJ: Congratulations on your marriage too. How was it directing your wife Gillian?

White: Thank you. It was wonderful. I was lucky because I didn’t have to act…I’m working with my soulmate and we’re romantically involved in the film. She’s my best friend, she makes it easier being there. I’m also lucky [because] the Sony execs cast her without knowing she was my wife. I got the added benefit of telling them they wouldn’t have to issue a separate hotel room or trailer [laughs].

CCJ: Speaking of collaboration, you seemed to have a good working relationship with Scott Sanders, [director of “Black Dynamite”]. I also loved your work together in HBO’s “Thick As Thieves” from years ago. Any plans to work together again?

White: We’ve spoken about a few things, but nothing has come together yet.

CCJ: As the official first Black movie superhero starring in “Spawn,” I was disappointed when they chose not to include your ‘Arrow’ character of Bronze Tiger in the “Suicide Squad” movie. I know the DC Entertainment movie and TV universes don’t intersect, but that would’ve been fantastic for you.

White: It would be fun, but I don’t harp on anything that doesn’t go to me. What’s mine is mine, and what’s someone else’s is someone else’s. There’s no role I wish I could have had, I just try to do the best with what I do have.

CCJ: I feel you on that. Anything else you’d like to tell our readers regarding “Never Back Down 3”?

White: There is actually. I believe this is the first time that an African-American real-life couple have worked together in a leading role capacity. We were trying to think of another time that’s happened, but can’t…we all would’ve known if Will [Smith] and Jada [Pinkett-Smith] have. This dynamic also repeats in our upcoming film together, “Cops and Robbers.” It’s interesting…the closest you get is Ruby Dee and Ossie Davis in “Do the Right Thing,” but they were supporting characters in that. It’s a trip…to my knowledge it’s never happened, *though Leon Issac Kennedy and Jayne Kennedy may have done it first. Regardless, I’m extremely proud of “Never Back Down: No Surrender” and want to see what happens when it comes out.