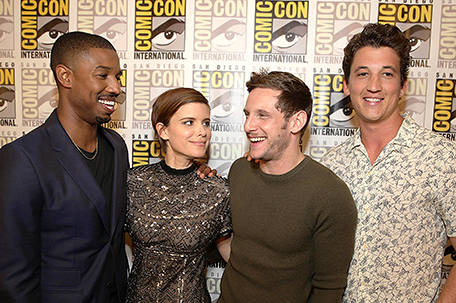 Here, the talented trio talk about the reboot of the beloved Marvel Comics film franchise.

Kam Williams: Hi Michael, Thanks for this opportunity to speak with you again. And it’s nice to make your acquaintances, Kate and Jamie.

Kam: I just want to let you know that I have more questions for the three of you you than we can get to, but if you answer succinctly, we might get through a lot of them.

Kam: Sangeetha Subramanian says: I’m so excited you all were cast! Did you get any advice from the actors who previously played your roles?

Kate: I had not met Jessica Alba until recently, actually. We were on an airplane together.

Jamie: Weirdly, Michael Chiklis was also on a plane I was on. But I was too scared to talk to him. Michael, did you speak to Chris [Evans]?

Michael: I talked to Chris when I met him at a Vanity Fair party right before we started shooting. We laughed about it and thought it was cool. He said, “Go do a great job.” That was it.

Kate: Do a good job. That’s good advice Chris has.

Kam: Harriet also asks: With so many classic films being redone, is there a remake you’d like to star in?

Kate: I’d like to remake Gypsy, and play the stripper. [Everybody laughs]

Kam: Attorney Bernadette Beekman asks: How did you prepare to play your roles?

Michael: I think it was already programmed into me from reading the comic books and being so familiar with Johnny growing up. So, there wasn’t really too much preparation for it, since I already knew his characteristics.

Kate: A lot of the preparation was just in talking to our director about our characters and about what the journey was going to be like for them.

Kam: I really enjoyed how much attention the picture paid to the characters’ formative years.

Kate: That aspect of the film was one of the things that really excited me, when I read the script. Learning about these characters before they become superheroes.

Kam: Bernadette also asks: If you could have a “superhuman” power in real-life, what would you choose?

Michael: The ability to teleport.

Kate: I think I’d like to be able to fly. That would be a cool superpower.

Kam: Professor/Filmmaker/Author Hisani Dubose asks: Michael: Which was tougher: Climbing the Hollywood showbiz ladder or growing up in Newark?

Michael: That’s pretty good. That’s a good question. I’ll say, growing up in Newark wasn’t easy by any means, but having a solid family foundation and the community really pushed me forward. So, I had an easier route than most. I’ve certainly been blessed. The Hollywood industry is pretty rough for anybody, regardless of background, as Jamie, Kate or anybody else enjoying longevity and true success can attest to.

Michael: I was prepared to answer that question, Kam, but I’ve been advised not to. [Everybody laughs]

Kam: Don’t worry, she’s not a stalker. She’s an attorney.

Michael: I don’t really spend that much time in Brooklyn. I’m from Jersey. I could help if she wanted to go hang out in Newark.

Kam: I think Danielle thought you lived in Brooklyn.

Jamie: She’s not a very good stalker, if she thinks he’s from Brooklyn.

Michael: Yeah, she’s not a stalker at all. [Everybody laughs]

Kam: Is there any question no one ever asks you, that you wish someone would?

Jamie: That IS a great question. I wish I had more time to think about it.

Kate: Miles would have a great answer for it.

Jamie and Michael: Yeah, he would.

Kam: The bookworm Troy Johnson question: What was the last book you read?

Michael: ”God’s Promises for Your Every Need.”

Kate: ”The Girl on the Train.”

Michael: My homemade mashed potatoes from scratch. You’ve got to use Yukon Gold potatoes, though.

Kate: I don’t cook. I need someone to cook for me. [They all laugh]

Kam: When you look in the mirror, what do you see?

Michael: I know you don’t want the real answer. So, I’m going to go with “trouble.”

Jamie: I see trouble, too. [Everybody laughs again]

Kam: Jamie, you found fame very early in life when you played the title character in Billy Elliot. How did you avoid all the pitfalls that plagued so many child stars?

Jamie: I don’t know. I can’t say that I avoided all the pitfalls. I’ve been lucky to have a lot of people close to me who keep me very sane and normal.

Kate: Jamie’s just an amazing person, and no amount of success would ever change the way he is.

Kam: The Viola Davis question: What’s the biggest difference between who you are at home as opposed to the person we see on the red carpet?

Kate: I usually just walk around in sweatpants at home. I don’t wear all that fancy stuff.

Michael: I walk around naked at home. That’s the biggest difference. [Everybody laughs]

Kam: If you could have one wish instantly granted, what would that be for?

[All three look at each other and laugh heartily]

Jamie: Yeah, world peace. [They all laugh some more]

Kam: The “Realtor to the Stars” Jimmy Bayan’s question: What’s your dream locale in Los Angeles to live?

Jamie: I don’t want to say.

Jamie: Eastside, for sure.

Kam: The Tavis Smiley question: How do you want to be remembered?

Jamie: Good question! As a nice dude who wasn’t particularly annoying. And as just a regular guy.

Kate: As generous and kind.

Michael: I’d be happy just to be remembered at all.

Kam: What’s in your wallet?

Michael: I actually don’t have a wallet.

Kate: And I forgot mine.

Jamie: Let me check…. A gym membership to a Gold’s gym in Richmond. But I don’t even live in Richmond, so I should cancel it.

Kam: Thanks again for the time, and best of luck with the film.

Jamie: Great questions by the way.

To see a trailer for Fantastic Four, visit: https://www.youtube.com/watch?v=wuV4BCYv-YY