Met Gala: Inside, it’s hard not to step on someone’s dress 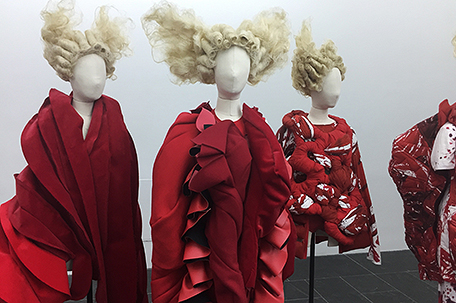 ABOVE PHOTO:  This photo shows part of the exhibit from “Rei Kawakubo/Comme des Garcons Art on the In-Between” at The Metropolitan Museum of Art in New York on Monday, May 1, 2017. The exhibit, which begins with the glitzy Met gala and then opens to the public May 4, is situated in a blinding white space, where visitors are encouraged to follow their own route around a series of geometric structures showing highlights of Kawakubo’s work. (AP Photo/Shelley Acoca)

NEW YORK — A thunderous drumbeat echoed through the cocktail reception at the Met Gala. Either an earthquake was hitting the Upper East Side of Manhattan, or the glittering assembly of guests was being called in to dinner.

Hasan Minhaj, a correspondent on Comedy Central’s “The Daily Show,” was standing with the show’s host, Trevor Noah, and marveling about the week he was having. Just two days earlier, he’d made a huge splash with his blistering speech at the White House Correspondents’ Dinner, and now he was at one of the most exclusive parties on the planet, rubbing shoulders (literally) with a ridiculous number of A-list celebrities, and getting praise for his performance.

“It’s been an insane week,” he said. “I keep thinking, what if the other night had gone poorly, what would tonight have been like?”

Like everyone, he was somewhat shell-shocked at the number of famous people present. He mentioned Matt Damon and Michael B. Jordan in particular, just two of hundreds of celebrities attending what often feels like a combination of the Oscars, Emmys, Grammys and Tonys, plus the worlds of fashion and sports.

The stars were packed so tightly together, in fact, that the major hazard of the evening seemed to be potential hem damage, from famous feet stepping inadvertently on long, delicate trains. Halle Berry, wearing a black-and-gold Atelier Versace jumpsuit, was one of those who had to stop and release her train from a stranger’s foot as she glided across the Carroll and Milton Petrie European Sculpture Court during cocktail hour.

The evening began with invited guests making their way past the assembled media and up the red carpet – actually, blue stairs – and then into the huge entry hall of the museum, where a massive tower of hot pink and white roses, in the form of a flower, awaited them. Nobody seemed to know how many roses had been called into service. That tower and the rest of the evening’s decor was inspired, of course, by revered designer Rei Kawakubo, founder of Comme des Garcons and the subject of the Costume Institute’s spring exhibit.

After climbing up the huge interior staircase, and past a receiving line, many opted to head before cocktails to the exhibit, set in a pure white setting with geometric structures housing some of the designer’s most famous collections.

One of those displays had actor Ansel Elgort staring at the strange body forms dreamed up by Kawakubo for her 1997 collection “Body Meets Dress, Dress Meets Body,” in which garments are stretched over bizarre protrusions coming from the stomach, the back, the waist or the hip.

“It’s sort of a comment on what people are doing to their bodies these days. I think that may be what she’s doing here,” Elgort suggested.

Some of the guests were wearing Kawakubo’s designs, known for their boundary-pushing, avant-garde nature, but not for their wearability. One of them, Michele Lamy, wife of designer Rick Owens, was wearing a red-and-pink Comme des Garcons dress that looked like a pile of unfinished strips of fabrics, somehow hanging loosely together.

“Yes, she’s a visionary, she is hugely influential, but she also makes it fun,” Lamy said.

Isabelle Huppert, the French film star, was wearing a Dior leather beret as she examined the garments on display. “It’s amazing, really like an art installation, not a fashion exhibit,” she said.

Lucas Hedges, the young actor nominated for an Oscar this year for “Manchester by the Sea,” suggested that the exhibit felt “like a guided meditation on fashion, life and beauty.”

Broadway actress Laura Osnes was experiencing her first Met gala. Wintour, she said, had come to see her new show, “Bandstand,” the week before, and suddenly invited her. There followed a mad rush to find something worthy to wear. Osnes ended up with a dramatically voluminous – in other words, huge – pink skirt with rose appliques and a long train by Christian Siriano. It was one of the more striking outfits of the evening.

“I figured, who knows if I’ll be here ever again,” Osnes said.

She soon found other Broadway stars to compare notes with: Josh Groban was there, as was Tony-winner Cynthia Erivo, and Andy Karl, who stars in “Groundhog Day” and famously tore his anterior cruciate ligament just before the show opened. Karl seemed in good shape, saying he was progressing well in physical therapy.

Speaking of being in shape, two of the best tennis players in history were in the room. The pregnant Serena Williams was in bright green Versace – and yes, she was glowing. As for ever-dapper Roger Federer, he lived up to his reputation with a Gucci tux that held a huge, jeweled surprise on the back.

“No! It’s a king cobra,” he replied. Then he posed for a few more pictures, and headed into dinner.