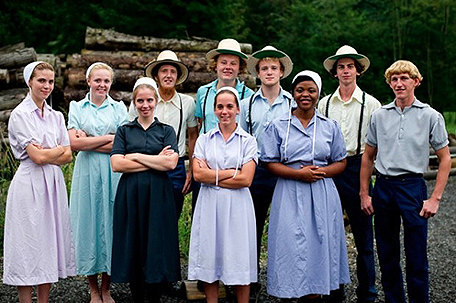 An intriguing project that needs the necessary financed to become a reality. The filmmaker, Ellie Foumbi, is also an actress who has appeared in a handful of films by filmmakers we’ve covered on this blog in the past (like Nikyatu Jusu, Tahir Jetter, Darius Clark Monroe, Clayton Broomes Jr. and others). She’s also a writer, director and producer who is now set to direct a new short film titled “Zenith,” which also happens to be her Columbia University thesis film, and she’s launched an Indiegogo campaign to help fund it. The goal is to raise $10,000 with a full month left until the campaign ends; thus far, about 16 percent ($1600) has been raised, so there’s still a chunk left to go. But 30 days gives the campaign enough time to reach (and maybe even surpass) its goal.

Zenith is about an adopted Black Mennonite whose life changes when a stranger is hired to work on her family’s farm. She begins her mornings at a local chapel where her adoptive mother (Annie) preaches. She and three other African Americans, including one named Caleb, stand out like sore thumbs amidst the predominantly White congregation. Unlike the rest of the members in church, Zenith is distracted, completely disconnected from her mother’s powerful sermon about the importance of family. After church, Caleb tries to connect with Zenith but she remains cold. On their way home, Zenith and Annie pass a drifter walking along the road, listening to his iPod. Back at the farm, while doing their chores, Annie tells Zenith that she needs to think about settling down. After all, she’s not getting any younger and Caleb will not wait forever. They are soon interrupted by the arrival of the drifter (Angel) they passed on the road. He’s there in response to an ad Annie placed seeking a farm hand. Although he only speaks Spanish, Annie hires him anyway. Zenith’s initial apprehension quickly turns to intrigue, as she and Angel slowly build an unspoken connection over the course of the work day, exacerbating her dilemma over whether she should stay within the the safety of her community, or explore the outside world.

Foumbi will star as Zenith (while also directing), and Benton Greene has been cast as Caleb. You can read much more on the project on its Indiegogo page https://www.indiegogo.com/projects/zenith-a-columbia-university-thesis-film#/.