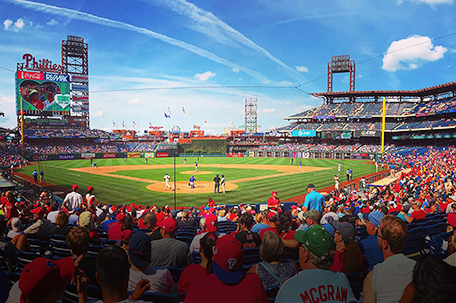 Celebrate the unofficial start of summer during Memorial Day weekend (May 25-28, 2018) in Philadelphia!

Elsewhere, nearly a dozen tall ships cruise into Penn’s Landing for Sail Philadelphia, a five-day festival that offers fun for the whole family on land, on deck and on the water.

And what would Memorial Day be without fireworks? Don’t miss special holiday fireworks shows along the Delaware River waterfront and at Longwood Gardens.

That’s on top of the amazing events and activities going on all weekend in the city, including Spruce Street Harbor Park, the Philadelphia Chinese Lantern Festival, beer gardens, exhibitions and more.

Read on some top picks for Memorial Day weekend in Philadelphia.

Parks on Tap at FDR Park

Raise a glass to the sunny, summer days ahead with fresh-air brews and bites at the Parks on Tap pop up in FDR Park. The traveling beer garden series posts up from May 23 to 28 at this sprawling green space in South Philadelphia at the corner of Broad Street and Pattison Avenue (across the street from AT&T Station and the sports complex). 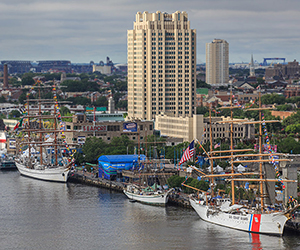 Equestrians and horse-lovers from around the world flock to the Devon Show Grounds for the Devon Horse Show and Country Fair. The event — which is the oldest and largest of its kind in the country — features hunters, jumpers, Saddlebreds, four-in-hand coaching, exhibitions and an old-fashioned fair. 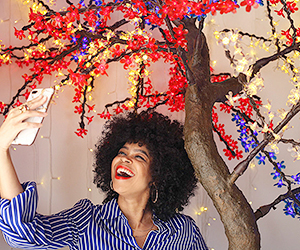 Where: The Philadelphia Building, 1315 Walnut Street

Kickoff of Tippler’s Tour and Independence After Hours

Historic Philadelphia, Inc.’s summer programming kicks off Memorial Day weekend to delight Historic District visitors and locals alike. On Thursday, May 24, the first Tippler’s Tour of the season ushers guests through some of Philadelphia’s most historic watering holes, complete with drinks, bites to eat, colonial songs and more. The popular walking-tour series, Independence After Hours, starts up Friday, May 25, granting guests after-hours access to Independence Hall — and a special visit with some of our Founding Fathers.

Fireworks & Fountains Show and Festival of Fountains at Longwood Gardens

Over Memorial Day weekend, Longwood Gardens continues to showcase its new fountain and its 1,700 jets that create beautiful fountain shows. Along with the daily Festival of Fountains performances, there are evening Illuminated Fountain Performances on Thursday, May 24 (set to music by The Beatles) and Friday, May 25 (set to popular Broadway hits). On Saturday, May 26, the first Fireworks & Fountains Show of the season returns to dazzle guests with a high-energy show that features some of the most popular songs of summer.

May Twilight in the Gardens at Philadelphia’s Magic Gardens

Skip the barbecue and head to the ballpark this Memorial Day weekend to watch the Philadelphia Phillies play the Toronto Blue Jays. This season marks the 25th anniversary of the Phils’ heartbreaking loss to the Blue Jays in the 1993 World Series. The three-game series kicks off Friday, May 25 at Citizens Bank Park.

The Philly Tango Fest — one of the biggest tango events in the nation — returns for the eighth year this Memorial Day weekend with an even bigger venue (a 5,500-square-foot ballroom!), a live tango orchestra and 13 terrific maestros (Argentine tango teachers and performers) to inspire guests. The event features 27 workshops for beginner and advanced dancers, food from Lino’s Lithuanian Foods and a pop-up boutique with vendors selling tango shoes and clothing.

The Philly POPS celebrate the men and women who serve our country during the third annual Comcast NBCUniversal Memorial Salute concert on Saturday, May 26 at the Mann Center. Guests can expect to hear patriotic anthems as well as popular show tunes and hits from the Great American Songbook.

Where: The Mann Center, 5201 Parkside Avenue

Philadelphia’s own Daryl Hall and John Oates curate and headline this music festival and celebration of the humble hoagie. Guests can also see Train, Fitz and the Tantrums, Down North and more exciting performers live on stage at Festival Pier at Penn’s Landing while enjoying delicious food and hoagie specials from local vendors.

Part of Sail Philadelphia’s waterfront festival programming, a brilliant fireworks show lights up the sky above the Delaware River on Saturday, May 26 at 9 p.m. This event is free and open to the public, so plan to arrive early to get the best view.

Head to Downingtown over Memorial Day weekend for the Downingtown Fine Arts Festival, where you can catch a bunch of local artists and leisurely peruse their work. The event is free and usually features other entertainment in addition to the fine art each year. Be sure to check here for details as more become available.

Memorial Day Weekend at the Museum of the American Revolution

The Museum of the American Revolution showcases the lives of Revolutionary War sailors during its Memorial Day weekend programming this year to coincide with Sail Philadelphia. Guests can discover more about the service of Revolutionary sailors, board the replica ship and interact with interpreters portraying ship crew members and city dock workers.

Where: Museum of the American Revolution, 101 S. 3rd Street

The National Constitution Center salutes the brave men and women of the military with a weekend of special programming. Attendees can learn more about the history of our national anthem, the American flag and some of the nation’s famous memorials as well as play 18th-century games and create make-and-take patriotic crafts.

Find antique furniture, folk art, porcelain, rugs, garden ornaments, ceramics and so much more at the 47th Annual Antiques Show at Brandywine River Museum of Art. This year, 26 notable dealers from all across the Mid-Atlantic region come to Chadds Ford to showcase and sell their fine goods over Memorial Day weekend. 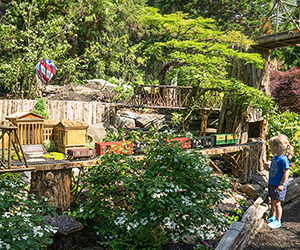 Morris Arboretum’s beautiful Garden Railway opens for the spring on Saturday, May 26. The model train display runs for a quarter-mile throughout the arboretum and features bridges, recreations of buildings and structures, tunnels and more

Where: Morris Arboretum of the University of Pennsylvania, 100 E. Northwestern Avenue 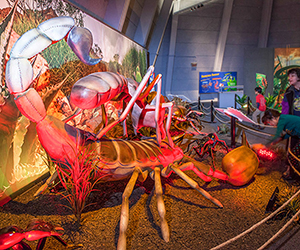 Xtreme Bugs at the Academy of Natural Sciences of Drexel University

Twenty giant animatronic insects — including a monarch butterfly and a Madagascar hissing cockroach — help put a magnifying glass to bugs’ behaviors, motions and sounds in this interactive Academy of Natural Sciences of Drexel University exhibition.

Where: The Academy of Natural Sciences of Drexel University, 1900 Benjamin Franklin Parkway

Laurel Hill Cemetery — the historic site that held the first Memorial Day Observance in Philadelphia 150 years ago — continues its tradition of honoring all veterans who honorably lost their lives defending the nation with a recreation of a Decoration Day service at the resting place of Battle of Gettysburg hero General George Gordon Meade. Guests can enjoy complimentary refreshments after the service.

Leonard Bernstein: The Power of Music at the National Museum of American Jewish History

Leonard Bernstein: The Power of Music at the National Museum of American Jewish History celebrates the composer’s 100th birthday by focusing on Bernstein’s life as an American Jew who lived through World War II, the Holocaust, the Vietnam War and social change. A mix of historic artifacts, sound installations, film and interactive media bring Bernstein’s fascinating story to life.

Hamilton: The Constitutional Clashes that Shaped A Nation at the National Constitution Center

It’s no secret that Alexander Hamilton often had a troubled relationship with his fellow Founding Fathers. Through rare artifacts and documents, including Hamilton’s portable writing desk and exact replicas of the pistols used in the famous Hamilton-Burr duel, the National Constitution Center takes a look at these political and personal differences between Hamilton and Thomas Jefferson, John Adams and others — and how these debates proved critical to the making of America.

Game Masters at The Franklin Institute

The Franklin Institute celebrates the genius and popularity of more than 30 game design innovators in an interactive setting in Game Masters. Visitors can engage in more than 100 video games, ogle original, transformative artwork, learn the stories behind celebrity characters, observe interviews with gaming pioneers and delve into both classic arcade diversions and immersive multiplayer experiences.

Modern Times: American Art 1910-1950 at the Philadelphia Museum of Art

Recenter the mind and strengthen the body over Memorial Day weekend at Race Street Pier’s popular free yoga series, which offers classes every morning at 7 a.m. on Fridays and 9:30 a.m. on Saturdays and Sundays. On Monday, a special Memorial Day schedule provides even more opportunities to get zen, with classes at both 9:30 a.m. and 6 p.m.

The Philadelphia Chinese Lantern Festival is back for its third year of illuminating Franklin Square with grand, artistic creations. For two months, the square at 6th and Race streets comes alive with 15,000 LED lights strewn across 28 different displays featuring 1,500 works of art. The dazzling 200-foot-long Chinese dragon and whimsical panda constructions from previous years are back, but all other original creations are brand new.

Renoir: Father and Son / Painting and Cinema at The Barnes Foundation

This Barnes Foundation exhibition explores the relationship between impressionist master Pierre-Auguste Renoir and master filmmaker Jean Renoir by juxtaposing the father’s paintings and drawings with the son’s films, costumes, photos and ceramics. Sylvie Patry, consulting curator at the Barnes, curated the exhibition. It is organized by the Barnes and the Musées d’Orsay et de l’Orangerie, Paris, in collaboration with La Cinémathèque française, Paris.

The Pennsylvania Academy of the Fine Arts (PAFA) is known for admitting the best of the best in the student art world, and this spring, the public has the opportunity to view and purchase works by talented students at the school. The annual PAFA Student Exhibition continues through June 3 with opportunities to view and purchase sculptures, paintings, installations and more.

Where: Pennsylvania Academy of the Fine Arts, 118-128 N. Broad Street

One of the best warm-weather spots in Philadelphia, Spruce Street Harbor Park is now open for its fifth season. The beloved temporary park — which welcomes 750,000 people each year! — invites visitors to lounge on colorful hammocks, enjoy delicious food from its floating restaurant, cool off with drafts from the beer garden and hang out and play games – table tennis, shuffleboard and more – along its waterfront boardwalk.

The Delaware River Waterfront becomes a seasonal wonderland each summer during Blue Cross RiverRink Summerfest and The Midway. Guests can enjoy boardwalk-style games and rides (including a 60-foot-tall Ferris wheel), try their luck in the arcade, take in waterfront views with drinks and food and take a spin around the city’s first outdoor roller rink.

Climb, crawl and zip around Fairmount Park this Memorial Day at Treetop Quest, Philly’s new aerial adventure park features zip lines, ropes courses and obstacle courses up to 60 feet above the ground for thrill-seeking adults and kids as young as four.

Nothing beats relaxing outdoors at a beer garden during a long holiday weekend. Philly’s got a ton of great ones, including Independence Beer Garden, Bok Bar, Morgan’s Pier and more, all listed here. Be sure to check each beer garden’s official website or call ahead to see if there are any special holiday hours.

Tons of art exhibitions, science wonders, history showcases and more continue through the holiday weekend and beyond at Philadelphia’s museums and attractions. Check out our full guide to spring exhibitions in Philly to see what’s on display and plan accordingly.

Your Guide to Labor Day Weekend in Philadelphia