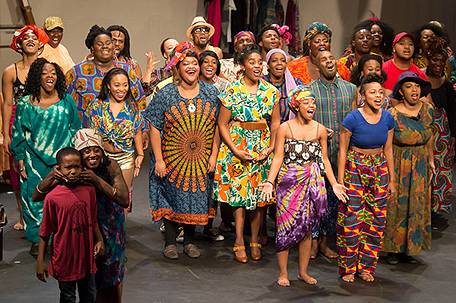 ABOVE PHOTO:  Part of the chorus performs a scene from Black Kid Joy

John Graves Productions has had quite the decade, and to celebrate the company’s anniversary, they brought back the popular stage production “Black Kid Joy.” Dancing and singing all through the Arts Bank in Center City this past December, the main story focuses on Chris (Naseem Robinson), a young boy who fell victim to violence. Through his untimely death comes so many reasons to live as the audience is taken through a journey along with Chris to discover who he is and what that means in the grand scheme of things. Taken to the town of Melanin, we discover how beautiful it is indeed!

There is not one single place throughout this production where Black pride wasn’t felt, as attention to detail was on full display for historical reference, dance, and textiles through costume and set design to take note of. The beautiful bright colors in the city offset the array of brown and black skin tones seen on the stage. There were many parts to the story line to notice including Chris’ back story and how acts of violence to brothers and sisters can affect not just a family, but a community, the wellbeing of family through a crisis, faith in the Lord and the power of prayer, and the main reason for the season — Christ’s birth.

John W. Graves, III has to have the ability to work in his sleep as he was responsible for the inception of all music, choreography, lighting, staging, costuming, set design, sound, and graphic designs for the play memorabilia. And to top it all off, he was a member of the cast. Clearly 10 years of setting the bar turns one into Superman! 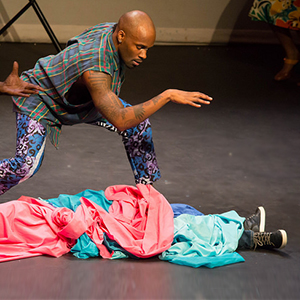 “Black Kid Joy” demands attention as there was so much going on to just fit one stage! As actors performed their monologues, costumes are breathtaking and whirling, and when attention is focused on their monologue, a dance ensemble filled the stage, accompanied by lively and often pitchy singing.

At times this created distraction — it was just too much to focus on at one time, but recovered by breaking up the scenes into simpler, segmented portions of the production, offering variety and something for everyone’s attention span.

Aside from the amazing dancing, engaging acting, and joyous singing, some performances to take note of are Graves himself, playing the character Lloyd, as he sang loudly and without trepidation, needing no microphone to amplify him or introduction to announce his presence — he made it known. The Gospel Medley could have given a hardened Christian hope as the audience erupted into a joyful noise to celebrate the musical ability of phenomenal lead vocalist Mahalia Jackson (Taylor Samuels).

Taken through different eras of history where Black excellence was on full display from Africa to the Civil Rights movement, into the funky 70s and vibrant 90s, this production refused to let up the importance of all that Blacks have contributed to civilization. Throughout each era, Chris was constantly reminded who he was, what and where he came from, and encouraged to let his light shine brighter than his fears.

“Black Kid Joy” was reminiscent of the Nativity Story meets The Wiz, and the result was one to be proud of for John W. Graves, III along with his dedicated and hardworking cast and crew.

Whatever comes next for him and John Graves Productions deserves noteworthy praise as the hard work is truly paying off in inspiring and uplifting ways for everyone to enjoy.

Sold out holiday musical by John Graves Productions returns for encore in the New Year, Jan. 14