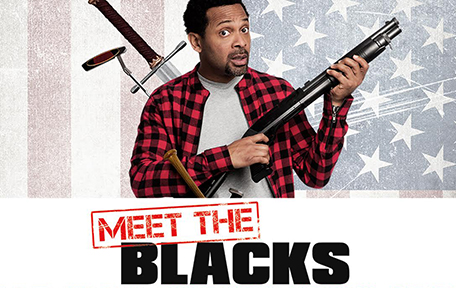 After coming into a small fortune under suspicious circumstances, Carl Smith (Mike Epps) decides to move his family from the ghetto in Chicago to Blanco Cielo, an exclusive development in Beverly Hills. Accompanying him on the cross-country trip are his wife Lorena (Zulay Henao), dating-age daughter Allie (Bresha Webb), and adolescent son Carl, Jr. (Alex Henderson).

Upon their arrival, Carl proceeds to offend everyone he encounters, starting with the gated community’s security guard whom he calls too dark-skinned to profile another black person. Despite the fact that the African immigrant is merely attempting to do his job, he is also accused of having the Ebola virus.

Next, when Lorena hires an Asian manicurist (Kathrien Ahn), Carl asks her to give him “some Chinese head.” Charming. And during a get acquainted stroll around the neighborhood, he manages to antagonize assorted neighbors, too.

More importantly, however, he also learns that The Purge is set to start at 7 pm. If you are familiar with the horror flick of the same name, then you know that means that all crimes will be legal during the impending 12-hour period, even murder.

What ensues is a politically-incorrect parody closely patterned on the original. For instance, Allie’s boyfriend (Andrew Bachelor) shows up unannounced, and Carl, Jr. proves to be a technical whiz with a robot and a drone at his disposal, just like their counterparts in The Purge.

Anything for a laugh, regardless of how self-hating or hurtful the joke might be. An expletive and N-word laced descent into modern minstrelsy.

To see a trailer for Meet the Blacks, visit: https://www.youtube.com/watch?v=ivqhlpUCnZY