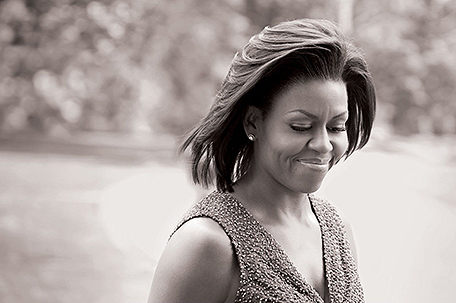 “Michelle Obama is unlike any other First Lady in American History. From her first moment on the public stage, she has challenged traditional American notions about what it means to be beautiful, to be strong, to be fashion conscious, to be healthy, to be First Mom, to be a caretaker and hostess, and to be partner to the most powerful man in the world. What is remarkable is that, at 52, she is just getting started.

A rollicking, lively, dinner-party conversation about race, class, marriage, creativity, womanhood, and what it means to be American today, The Meaning of Michelle offers a parting gift for a landmark moment in American history.”

— Excerpted from the book jacket 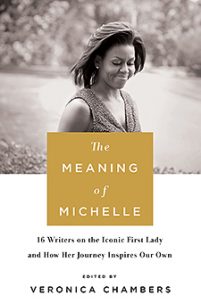 Just as her husband undoubtedly inspired a generation of marginalized youngsters to believe that they could achieve anything they set their minds to, Michelle was a transformative figure in her own way, including the way she helped the world appreciate Black beauty. Because of the high visibility of her position, almost single-handedly, she managed to successfully challenge the culture’s narrow definition of beauty based on European features.

For this and myriad other reasons, Michelle was embraced by fellow Black females. And many of them are delineated in “The Meaning of Michelle,” a reverential retrospective acknowledging a debt of gratitude owed to a much-beloved icon.

Edited by Veronica Chambers, the book is composed of 16 essays by a variety of admirers, each accomplished in their own right. One — Chirlaine McCray — is even a First Lady, being married to New York’s Mayor, Bill de Blasio.

The diverse list of contributors includes luminaries from all walks of life, including filmmaker Ava DuVernay, Harvard professor Sarah Lewis, mezzo-soprano Alicia Hall Moran, and best-selling novelist Benilde Little, to name a few. Consider this offering by DuVernay who waxes romantic reflecting upon a “First Lady with pride, panache and polish.”

A priceless keepsake positioning for posterity Michelle Obama as a positive role-model for the ages.