Matilda at the Academy of Music 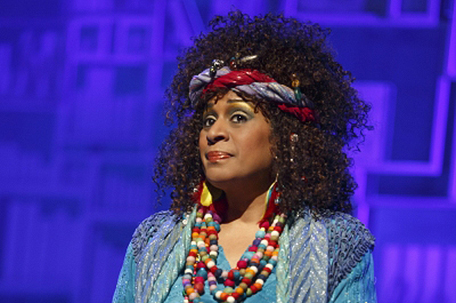 ABOVE PHOTO:  Ora Jones as Mrs. Phelps in Matilda.

If you’re anything like me you grew up reading Roald Dahl’s Matilda. Matilda tells the story of a brilliant little girl with an affinity for reading and adventure that far surpasses most 5-year-olds.   Matilda is often surrounded by narrow minded adults who tell her that her ideas don’t matter. Despite being outnumbered,  Matilda is able to find some solace in one place the library. She also finds one adult outside of Ms. Honey who actual listens to her, Mrs. Phelps.

Now thanks to Broadway Philadelphia at The Kimmel Center, Matilda the Musical takes over the stage at the Academy of Music for a magical experience. I had an opportunity to speak with seasoned actress Ora Jones who plays Mrs. Phelps in the play.

Watching the stage transform into a world of words, and imagination filled the room with a sense of nostalgia. Jones described the experience by saying “It really is about trying to get an entire world onto the stage in a relatively short amount of time.” The dynamic of Mrs. Phelps and Matilda’s relationship and their shared love for the art of storytelling is quite a lot of fun to witness.  “When Matilda is with Mrs. Phelps in the library, it is one of the few places in this story where Matilda does not have to explain anything,” Jones said. “She doesn’t have to take care of anyone; she can simply be herself. She doesn’t have to explain why she is the way she is, Mrs. Phelps accepts her the way she is. There is nothing Mrs. Phelps actually needs from Matilda.”

Thanks to Mrs. Phelps, Matilda is allowed to just be a kid.

Speaking of kids, there are some phenomenal young people in this cast.

“It is wonderful working with them,” Jones said of her young castmates. “They are every bit as professional, creative and dedicated as any of the adults in the show and they have a way of being present. They constantly remind you that you have to be creative and that you have to have fun.”

The show is filled with some truly outstanding performances. Matilda reminds us that sometimes you have to go against the grain with the song “Naughty”, Mrs. Wormwood gives Miss Honey a lesson in boldness and salsa dancing in “Loud”, Matilda’s classmates sing about their aspirations to stay up late and eat their fill of candy in “When I Grow Up”, and Miss Trunchbull lands a perfect somersault as she discourages the children from speaking their minds in “The Smell of Rebellion”.

There was so much to enjoy in Matilda. I’m glad that I got to see it.

Essence Fest 2013 from Maxwell to Jill Scott to Beyonce, music and empowerment