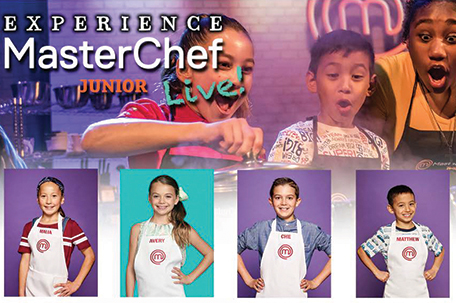 The competitive cooking show, “MasterChef,” premiered on Fox in 2010.  It was co-created by chef  Gordon Ramsey –based on the British series of the same name — and features home cooks who aspire to be professional chefs.

After a series of auditions, where the home cooks try to impress a panel of celebrity chefs with their best dishes, the contestants are selected. The concept of “MasterChef” took on some much younger contestants aged 8-13 with the premiere of MasterChef Junior in 2013.

The stage at Merriam Theater was transformed into almost an exact replica of the MasterChef kitchen on the show. The Mobile MasterChef kitchen even included a stocked pantry and herb garden. The cast of talented young chefs joined “MasterChef Junior Live!” host Casey Shane on stage after video highlights from the show introduced them to the audience.

“MasterChef Junior Live!” follows a similar format to the original show, including the dreaded elimination test.

The evening began with a pressure test. The mission was to complete an appetizer of quail eggs, seared scallops and fried polenta in just 10 minutes. The Junior MasterChefs tasted each other’s dishes, each offering compliments to their fellow chefs.

MasterChef Junior host Shane tested his own culinary skills as well, when he was given one minute and 30 seconds to successfully complete the whipped cream challenge. Shane was challenged to perfectly whip sugar and heavy cream to stiff peaks. His success or failure hung in the balance as he held the bowl over his head… thankfully he succeeded.

Next, the Junior MasterChefs were each joined by a member of the audience as their unofficial sous chefs. Each of the sous chefs was asked to assist the Junior Master Chefs in creating an entrée in just 50 minutes. Each chef was given a different protein. Malia received cod, Avery was given mahi mahi, Matthew received filet mignon and Che was given salmon.

For fun measure, the Junior MasterChefs had to cook with one hand behind their back for a few minutes. Then they were challenged further after being told that they had to incorporate a mystery canned good in their dish.

Malia had to incorporate creamed corn, Avery, who chose to do fish tacos, had to incorporate black beans, Matthew had to use tomatoes, and Che was given mandarin oranges. The sous chefs and home cooks selected from the audience were rewarded with a taste of their hard work.

“MasterChef Junior Live!” was truly an enjoyable experience for lovers of all things culinary and a unique family outing for children and their families. To find out more about tickets, showtimes and where the tour will be next, visit; www.masterchefjuniorlive.com.