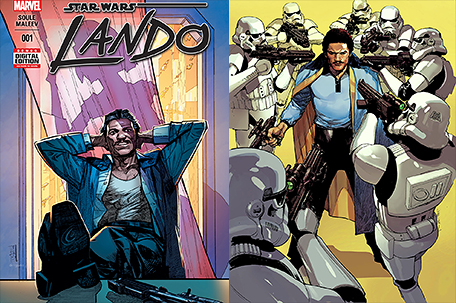 Late last week, Marvel and Lucasfilm announced that Lando Calrissian will star in his own limited graphic novel series. “Lando #1,” from creators Charles Soule (“Death of Wolverine,” “Inhuman,” “She-Hulk”) and Alex Maleev (“Daredevil,” “Spider-Woman,” “Moon Knight”), hits stores in July, and finds Lando embarking on his “greatest caper ever,” says the press release. Above are the first Lando cover and an alternate.

“Is Lando Calrissian the coolest character in all of ‘Star Wars’? Depends on who you ask, probably. But if you ask me, the answer is yes, and I plan to prove it with this story,” said series writer Soule.

In Marvel’s “Lando,” developed closely with Lucasfilm, the titular character – in the days before he became a hero, but still with Lobot at his side – looks to steal one of the galaxy’s most valuable ships. But, as usual, he may be in over his head.

“Before Cloud City, before his glorious Death Star run,” added Soule, “Lando Calrissian was just a man trying to make his way through an uncaring universe determined not to recognize that he was undeniably the coolest man in the galaxy. But Lando’s got a plan to change all that… and it starts with the deal of a lifetime.”

This news comes on the heels of the character’s return in the “Star Wars Rebels” animated series.

An obvious question here is whether this newfound attention being given to Lando will eventually lead to a big screen adaptation of the character’s story, or even a TV series.

Disney now owns both Marvel and the Star Wars franchise, so crossovers like this shouldn’t be a surprise. In fact, I wouldn’t be shocked if there’s eventually some Marvel universe/Star Wars crossover movie. The studio owns both hot properties, so why not fully exploit them for profit, right?

TBS welcomes a new family to Wednesdays with the original Series Are We There Yet?