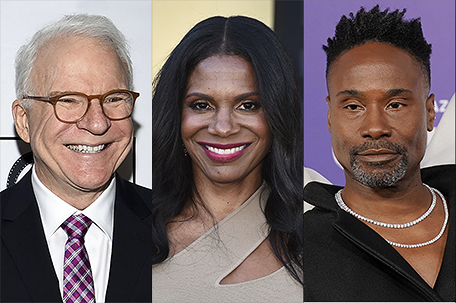 ABOVE PHOTO: This combination of photos show Steve Martin, left, Audra McDonald, center, and Billy Porter, who are among the celebrities participating in a 10-hour telethon to raise money for the victims of the war in Ukraine. The “Stars in the House” special will air March 26. (AP Photo)

An all-star roster of film, TV and theater performers — including Steve Martin, Annette Bening, Billy Porter, Audra McDonald, Cynthia Nixon, Kristin Chenoweth, David Hyde Pierce and Rosie Perez — have signed up for a 10-hour telethon to raise money for the victims of the war in Ukraine.

The event also hopes to feature Ukrainians, including Oleg Karpenko, a Ukrainian theater and film actor who co-started with Ukrainian President Volodymyr Zelenskyy in “Servant of the People.”

Donations made during the event will benefit the International Rescue Committee and its humanitarian efforts for those affected by the war in Ukraine.

“Stars in the House” is a live-streamed concert series created by SiriusXM Broadway host Seth Rudetsky and producer James Wesley that has raised over $1 million for the Actors Fund’s COVID-19 relief program and other nonprofits.

It’s just one way the theater community has tried to help Ukrainians: Broadway Cares/Equity Fights AIDS awarded $300,000 in emergency grants to ameliorate the humanitarian crisis in Ukraine and a portion of ticket sales for “The Minutes” will go to Save the Children’s Ukraine Crisis Relief Fund.