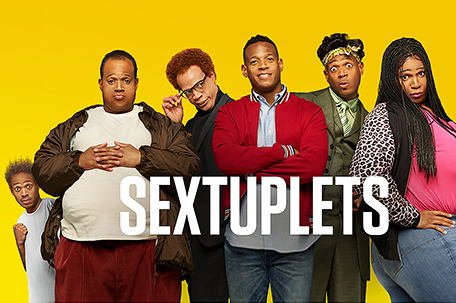 Audiences have been enjoying laughs from the Wayans family for decades. However, Marlon Wayans has carved out a niche all his own with his knack for physical comedy, lack of inhibitions and his unique ability to consistently bring those laughs.  He has also mastered the art of seamlessly maneuvering between television and film as a writer, producer and actor throughout his career.

After the success of sitcoms like The WB’s “Wayans Bros” and NBC’s “Marlon” and films like “Scary Movie,” “A Haunted House,” “White Chicks” and Netflix’s “Naked,” Wayans continues to draw audiences. His latest project — “Sextuplets” — will certainly fit well with his body of work. In the film, he  impressively plays all six of the sextuplets. Wayans stopped in Philadelphia to discuss his most challenging project to date.

“Sextuplets” directed by Michael Tiddes, tells the story of happily married, expectant father Alan (Wayans). After unlocking his closed adoption, Alan discovers that he has five other siblings. An adventure ensues as Alan embarks on a journey to reconnect with his siblings. Wayans shared the journey that the film itself took from inception to fruition.

“Nathan Reimann, who’s a producer on the movie, brought us the script from a writer named Mike Glock,” he said. “I thought the script was fun and interesting, and thought ‘sextuplets… this could be fun.’ I think originally I was thinking of it being me and my brothers, but then I started thinking, ‘what if I played all of the sextuplets?’”

“We had it for, like 9 years,” Wayans continued. “Then I did “Haunted House,”“Haunted House 2,”,“Fifty Shades of Black,” and then I did “Naked.” The compilation of the success of all of those got me the opportunity to do “Sextuplets.”. Netflix asked me what I wanted to do after “Naked,” because it was huge for them. I said I want to do this. They said you can do that for this amount of money. They didn’t give me an “X-Men” budget, but it was one of the bigger budgets I had to work with.”

“Sextuplets” holds true to its genre as a comedy, but it also brought with it a grueling schedule and some extreme conditions.

“I had a lot of fun between action and cut, but this was the most work I’ve ever done in my life! Slaves would’ve been like ‘oh my lord, I feel so bad for him,’’ Wayans said with a laugh. “It’s crazy, I would go into makeup at 3 o’clock in the morning and I’d sit there for 7 hours. You can’t sleep because it feels like someone is pranking you. Then I’m done with makeup after 7 or 8 hours and I would start work. I would work 15 to 18 hours. Then it takes an hour and a half to take the makeup off. Then I would go home and I would sleep for two to three hours. Then I’d have to wake up, get back to work and do it all over again.”

“ So, when they said “action” and “cut,” I had a lot of fun, but it was just a lot,” he continued. “I was walking around with 50 pounds of makeup on, it’s hot, there was this cooling thing on my chest to keep me cool that I had to carry around with me, there was a hose filled with water that connected to this thing on my chest… it was hard.”

Wayans admitted that two characters in particular were the most challenging — Dawn and Russell.

Throughout “Sextuplets,” Wayans does a solid and consistent job in making sure that each character is distinct. He was able to achieve this by going back to basics of his training.

“I just went back to performance high school days,” he said. “We did animal association, so whatever character we use to do… we would study an animal. We would look at that animal and go,’ok, give the characteristic of that animal to the character.’ That way, the character would have their own distinct personality, and each one would have a different voice.”

Each of the sextuplets — Alan, Russell, Dawn, Ethan, Baby Pete and Jasper — have their own distinguishable characteristics. Wayans drew from real life to bring each character to life.

“Russell’s voice came from my friend Steve that I went to college with,” he said. “He wasn’t fat at all, he was actually really skinny and he had a deviated septum. I was like, ‘that voice —  I got to put it somewhere’so I gave it to Russell. I built what he looked like in my head, and then I worked with Tony and his group and we designed each character.

”With Dawn, it started with the hand movements, because a lot of sisters talk with their hands,” Wayans continued. “So, I kind of got that and the mannerisms from friends of mine. The look, I took two of my sisters and threw them together. For Jasper, it was like what if he was really, really light-skinned and I thought having the black sheep of the family being light-skinned would be funny. We initially wanted him to be albino but Netflix said no… so we made him extremely fair, with red hair and quirky.”

Wayans was also able to draw from being a member of his real-life big and insanely talented family for the characters.

“The whole story that we injected into the journey… it had to be about something,” he said. “We were able to do that with me coming from a big family that I love. At the same time, when you love a big family, there’s always a form of hate that goes with it. It’s not that you hate them –but you might hate some of the things that they do — but you always learn to just love them anyway.”

“What happens is, in return, your family will always have your back,” he continued. “Growing up with a big family has been some of the most fun I had in my life. To this day, I will never depart… it’s always my tribe. No matter how much of an individual I try to become, I’m still a Wayans and will always be proudly.”

Rounding out the cast are veteran actors Glynn Turman (Leland), Debbi Morgan (Janet), and Molly Shannon (Linda).  Bresha Webb, who has worked with Wayans on “Marlon,” plays Alan’s wife, Marie. Wayans lauded over her talent and explained why he chose her for the role.

“She’s an ode to beautiful chocolate women,” he said. “She’s amazingly talented, and when I believe in people, I believe in people. I feel like I have to keep re-introducing people like Bresha and Essence (Atkins) until people really feel who they are, embrace them and until Hollywood embraces them. I love them like sisters, they are dear friends and I want to see them successful because of their talent.”

“I thought it would be great to cast a beautiful dark-skinned woman next to me,” Wayans continued. “It’s always the fair-skin girl, and it’s no disrespect to fair-skin women at all,[but]  I just honestly wanted a beautiful chocolate woman there.”

This film is sure to draw comparisons to other comedic work like “The Nutty Professor” and  “Austin Powers,” where Eddie Murphy and Mike Myers took on multiple characters respectively.

Wayans shared that aside from the laughs and the challenges of playing multiple characters, he also took pride in the moments that allowed him to show his acting chops.

“As wild as the movie is, I feel like I got a chance to act. I wasn’t over the top until I had to be… until the situations called for it. I’m learning personally to ease back off the gas. I know what I can do, but I think my less will give me more.”

Wayans ended by sharing his hopes for the audiences.

“I hope they walk away laughing, wanting to see it again and telling all of their friends ‘You’ve got to see this movie’” he said. “You can have a party with this. You can sit there with 20 people you invite over, laugh and make your house a movie theater. I want them to feel good. This is a movie that you’ll leave and go ‘I feel good that I saw this, it put a smile on my face’… it has a good sentiment.”

“Sextuplets” is available to stream on Netflix.