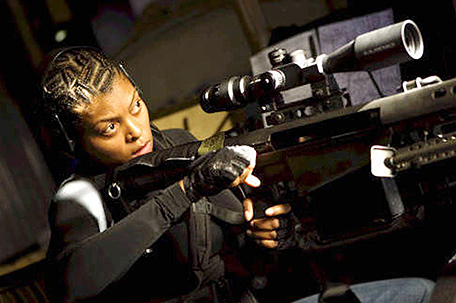 “Hidden Figures” is still in some domestic theaters, and continues to expand overseas with an impressive worldwide total thus far of over $223 million. While it didn’t have much of a night at the Oscars this year, despite a few nominations, its stars are seemingly having maybe the best years of their careers, notably Taraji P. Henson, who lined up another high profile big-screen project about a month after “Figures” opened in theaters.

Henson is attached to star in Sony/Screen Gems’ upcoming action-drama “Proud Mary,” playing a hit-woman named Mary, whose life is completely turned around when she saves a young boy who awakens a maternal instinct in her that she never knew she had. The boy also happens to be the orphaned son of a drug boss she’d been hired to kill. She attempts to give herself and the boy a fresh start, but that proves to be a challenge because her past life won’t let go.

Iranian-Swedish film director, screenwriter, and cinematographer Babak Najafi has been tapped to direct “Proud Mary.” He is most known for directing “London Has Fallen,” the 2016 sequel to Antoine Fuqua’s “Olympus Has Fallen.”

Joining Henson in front of the camera is Billy Brown (“How to Get Away With Murder”), although details on his role are a mystery for now. Veteran actors Margaret Avery and Danny Glover, as well as newcomer Jahi Di’Allo Winston (“The New Edition Story”) round out the cast.

Scripted by John Stewart Newman and Christian Swegal, production is slated to begin this month in Boston, with Paul Schiff and Tai Duncan producing.

An early teaser for “Proud Mary” was unveiled at the Cinemacon event just last week, and it apparently impressed those who were in attendance. I read lots of enthusiastic reactions to it; “harcore action”; “sleek and stylish”; our friends at SlashFilm described it as “a female John Wick-style action film”. There were more reactions, but you get the picture. So we’re most definitely curious to see this, especially with the additions of skilled thespians in Avery and Glover. Let’s hope that Sony releases the Cinemacon teaser online soon.

Screen Gems has slotted “Proud Mary” for a January 26, 2018 theatrical opening, just in time for Black History Month, February, 2018, which is also the same month that Ryan Coogler’s “Black Panther” and John Boyega’s “Pacific Rim: Uprising” both open. A crowded, competitive month is rare for Black cinema at this level.