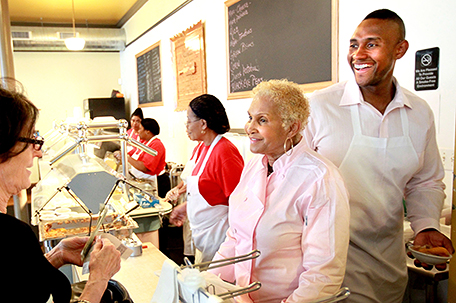 ABOVE PHOTO: A customer picks up some to go food from Sweetie Pie’s owner Robbie Montgomery, center, and Montgomery’s son James Timothy Norman, right, at Sweetie Pie’s in St. Louis on Tuesday, April 19, 2011. Norman, of Jackson, Miss., was arrested Tuesday, Aug. 18, 2020 in the March 14, 2016, fatal shooting of his nephew Andre Montgomery, who was gunned down near a park in St. Louis. (David Carson/St. Louis Post-Dispatch via AP)

Norman and Montgomery both appeared on OWN TV’s “Welcome to Sweetie Pie’s,” a reality show set in a restaurant founded by Montgomery’s grandmother. It ran five seasons starting in 2011.

Montgomery, 21, was killed in 2016 by Travell Anthony Hill, who said he was hired by Norman. Hill pleaded guilty in June to conspiracy to murder-for-hire and was sentenced to 32 years in prison.

Norman, 43, was convicted in September of murder-for-hire and fraud charges. Sentencing is in March.