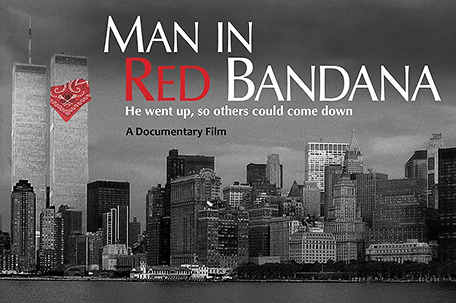 Sometimes, substance trumps low-production values. Case in point, “Man in Red Bandana”. Minutes after the World Trade Center was struck by United Airlines Flight 175 on the morning of 9/11, Welles Crowther called his mother to let him know he was okay. The 24-year-old stockbroker knew she’d be worried, since his office was located on the 104th floor of the South Tower.

However, Welles was also a volunteer firefighter who was seriously considering abandoning his very-promising Wall Street career to start over with the NY Fire Department. In fact, he’d recently expressed to his father a feeling that having a more meaningful job was more important to him than making lots of money.

So, it wasn’t a surprise to Welles’ family that, instead of leaving the burning building, he might remain inside, calming leading the injured and dazed to safety. For, after discovering the only avenue of escape available to those trapped above the impact of the plane, he made his way up and down that unstable staircase several times to assist seemingly-trapped victims.

But because he covered his face with a red bandana while altruistically performing his heroics, none of those he saved ever knew whom to thank. Nevertheless, a number articles published by the New York Times and other newspapers featured survivors’ accounts crediting a masked young man with saving their lives.

Unfortunately, Welles perished in the collapse of the tower, but not before rescuing at least a dozen victims. It was easy for his folks and anybody else that knew him to identify Welles as the unidentified Good Samaritan. That’s because a red bandana had been his trademark since his father first gave him one at the age of 7.

Welles wore the bandana throughout childhood, on the lacrosse field while playing for Boston College, and even sported it in the pocket of his suit jacket as an up-and-coming equities trader. And then, during the last and finest hour of his abbreviated life, he used it to filter smoke from the acrid air he was being forced to breathe by the conflagration.

An overdue tribute to a selfless hero who put into action his heartfelt belief that we are all here to care for one another. A must see documentary guaranteed to leave you in tears!