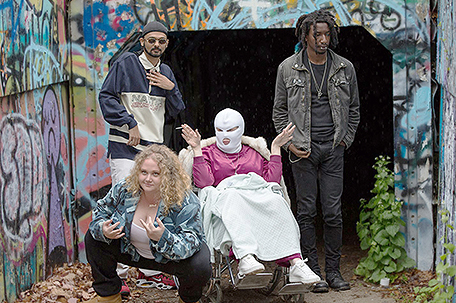 Mamoudou Athie is set to play opposite Brie Larson in her directorial debut, “Unicorn Store.” He also can be seen in the recurring role of Grandmaster Flash in “The Get Down,” a Netflix series created by Baz Luhrmann.

Athie recently starred opposite Stockard Channing in “Me & Mean Margaret,” a pilot for an NBC sitcom. On the big screen, he appeared alongside Emma Watson and Tom Hanks in “The Circle,” a suspense thriller based on Dave Eggers’ novel of the same name.

Athie received critical acclaim for his stage debut at New York’s Lincoln Center Theater opposite Diane Lane and Tony Shalhoub in “The Mystery of Love and Sex.” Here, the graduate of the Yale School of Drama discusses his new film, “Patti Cake$,” an overcoming-the-odds saga revolving around a Rubenesque, White rapper’s (Danielle Macdonald) quest for superstardom. 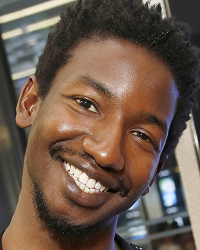 Kam Williams: Hi Mamoudou, thanks for the interview.

MA: In a nutshell, the script, the director and the character, particularly meeting Geremy [writer/director Geremy Jasper]. I had a sense he was going to make something special. I initially had reservations about my character, Basterd, but I just couldn’t get it out of my mind. And the script is one of a kind, yet also familiar in a personal way. Had me laughing aloud as well.

MA: It’s a glorious underdog story with wit, charm, and verve about the illest rapper in Dirty Jerz [aka New Jersey], KIlla P [played by Danielle Macdonald] with no holds barred stunts, high octane high speed car chases, and superheroes galore. And we have 300 million Instagram and Twitter followers.

KW: How did you approach playing Basterd? Did you base him on anybody?

MA: Not on any one particular person. I took something of a “dim sum” approach to him. He’s a mix of some people I grew up around, Geremy’s thoughts and influences, for sure, and Mickey Theis, a classmate of mine from YSD [Yale School of Drama]. He’s one of the most beautifully sensitive actors I’ve ever worked with.

KW: Were you surprised by the performance of your co-star, Danielle Madonald?

MA: Nah, I knew she’d totally slay it after I heard her first track. But when I heard that first track, yes — I was surprised. That was amazing!

MA: I don’t know . It’s kind of a medley, but what sticks out the most is going to the park and zoo with my family and my holographic Teenage Mutant Ninja Turtle TV. It was half an inch and actually for my action figures, but I loved it more.

MA: Again, I’m not sure if there was one particular moment, but I’m almost positive my parents have never lied while I’ve been alive. So they certainly set the bar for morals. I’ve lied though. Sorry, Moppa.

MA: Hmm… I can’t say it’s THE most important as it’s hard to rate these things, but certainly being honest is a good way to sleep well at night. Learned that verrrrrry early. [Chuckles]

MA: Cutting grass. I worked at the National Shrine in DC for a spell in 10th grade.

MA: Depends on the day!

MA: Sorry, I didn’t hear that question. Next!

MA: [LOL] No. That’s funny to imagine, though. I’m thinking of a person in an interview wondering, “I wish they’d ask me about this!” while quietly fuming internally.

MA: No! There are so many stories that have yet to be told. New content! Infinite content!

KW: Thanks again for the time, Mamoudou, and best of luck with Patti Cake$.

MA: Thank you so much, Kam.