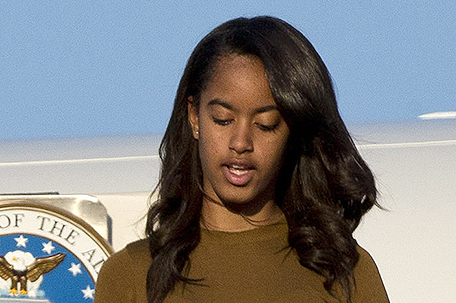 As the Obama family leaves the White House behind and enters private life after 8 years in the international spotlight, one question that’s been on the minds of many is what’s next for each of them? While it’s not entirely clear what the former POTUS and FLOTUS will tackle next (there’ve been rumors of some kind of media company, but nothing’s been confirmed), we can say with some certainty what 18-year-old first daughter Malia Obama is interested in pursuing – work in the film/TV industry.

It was announced last year that she plans to attend Harvard University in the fall of 2017. Both of her parents attended law school there. Malia is taking a gap year before beginning her pursuit of a college degree. Harvard actively encourages admitted students to do so.

On Monday, it was announced that Malia’s gap year will include an internship for Hollywood super producer Harvey Weinstein at The Weinstein Company. She’s expected to begin work in the company’s New York office in February after her family’sPalm Springs vacation.

It is unknown which specific area of the Weinstein organization  Malia will work, or what part of the film industry she’s most interested in pursuing. But she couldn’t have picked a more formidable player in the business to essentially shadow than Harvey Weinstein – an opportunity that I’d venture to say that many her age would love to have.

Hollywood is an industry in which many do start from the bottom – as interns and production assistants, as Malia is doing, for example – eventually picking a specific path of interest and treading it. DeVon Franklin is just one famous example of a executive who got his start as an intern and worked his way up the ladder.

In a January 2014 “New Yorker” profile of former President Barack Obama by David Remnick,  it was revealed that Malia was an aspiring filmmmaker. Her future plans might be to complete her undergrad studies at Harvard, and then attend a top grad film school like NYU. Maybe in another decade or less, we’ll be writing about Malia Obama being in contention to direct some high profile studio flick.