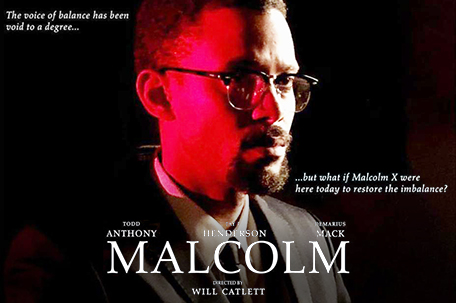 On May 19, 1925, Malcolm Little —  otherwise known as Malcolm X — was born in Omaha, Nebraska. The Muslim minister and human rights activist was known throughout the world for speaking openly and candidly about racism, Black empowerment and what he believed was necessary for Black people to thrive in a country that was resistant to changing the aforementioned.

His ideals were often met with opposition and brutality. Malcolm X was assassinated for those ideals and his rise to power, February 21, 1965. But what if he hadn’t been so cruelly taken from the world? Imagine if you will, that Malcolm X was still alive today.

Known for his roles in OWN’s “Love Is” and The CW’s “Black Lightning,” “Malcolm” was directed by Will Catlett and co-written by Catlett and Anthony.

The film was released May 19 in honor of the late activist’s birthday. The story, set in present day, opens in black and white as Malcolm X (Anthony) prepares to be interviewed at St. Willard University. Shortly thereafter, the scene transforms to color, as two interviewers, played by Jay D. Henderson and Demarius Mack, greet him.

During the interview, Malcolm X addresses a number of topics that deal directly with our country’s current political and racial climate. When asked have things changed,  he replies,  “Seemingly, people would say things have come a long way. I think that Negroes, or should I say, ‘new age’ Negroes have been conditioned to think things have changed.” He later adds, “Remember brother, when you say that things have changed, you’re saying that old ways or habits can no longer take place. However, that’s simply not the case.”

In the film, Malcolm X also speaks about Barack Obama becoming the first Black president, Dr. King’s memorial in Washington, and Muslim sisters in Congress as examples of progress… not change.

He adamantly points to the killings of unarmed Black men, women and children like Tamir Rice, Freddie Gray, Trayvon Martin, Philando Castile and Sandra Bland as other points of reference for how things have not changed. He points out that the major difference is that we went from being sprayed with fire hoses to being sprayed with bullets and it’s called self-defense.

Malcolm X then addresses the divide in the country that can be attributed largely to Donald Trump, who he refers to as ‘45’. He highlights President Trump’s lack of respect for women and complete disregard for Black lives as a major factor in the divide of the country.

He adds to that sentiment, sharing tangible ways to work towards Black ownership and to circulate the Black dollar through Black businesses in the Black community. Malcolm X  issues a call to action from those that have the influence and power, to do something with it.

The film ends with the three men standing, a brief moment of mutual respect between Malcolm X and the young Black interviewer, and finally with Malcolm X handing the young Black man his glasses — a metaphor of sorts for passing the torch to the next generation.

Todd Anthony embodies Malcolm X in every way possible through his portrayal. Everything from the timbre in his voice, to his mannerisms, to the inflection he uses with each phrase is brilliant. The power in this story is that it gives a glimpse of maybe what life would be like today if we still had our leaders to look to for guidance. This film is a must see! Visit https://youtu.be/5W58TnNX7bY to view the film.